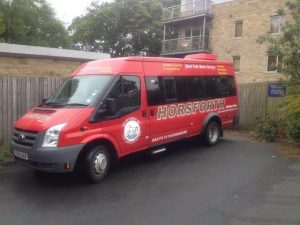 A minibus that provides vital transport for housebound pensioners was stolen over the weekend.

The bus transports 70-100 elderly people each week from their homes to church and to their local Morrisons in Horsforth. It also takes them on regular outings further afield.

Chris van Heel, 63, Secretary of the Horsforth Minibus Fund and volunteer driver, arrived at the Woodside Methodist Church at 11am yesterday for his usual Monday church run only to find the vehicle missing from its usual home in the car park.

He said: “I’d like to personally wring the neck of the thief, quite frankly.

“We’ve had the unfortunate task of notifying all the people we were due to pick up on Monday that we can no longer take them to their destinations, and they rely on us heavily.

“We provide a dedicated service to the elderly and infirm who are unable to reach the places we take them to themselves.”

The distinctive red bus is a red 17-seater Ford Transit, registration YD59 OAB, and has yellow writing on the side reading ‘Horsforth Minibus Fund’. It was reported stolen almost immediately to a passing police patrol, but as yet nothing else has been heard about its whereabouts.

Unless the bus is found in the next few weeks, the charity will have to embark on a fundraising drive to buy another one.

The Horsforth Minibus Fund was registered as a charity in 2001, but has been running in some form since the 1970s.

Mr van Heel started volunteering for the charity after an appeal for extra bus drivers following the death in early 2014 of previous Secretary John Hardcastle, who had run the service almost single-handedly for 10 years.

Currently the minibus has a team of seven drivers who operate the service seven days a week, but more volunteers are always welcome.

Anyone who thinks they may have seen the minibus should contact the Crimestoppers hotline on 0800 555111. People wishing to volunteer for the service can email the minibus team on horsforthminibus@gmail.com.