Young runners set to raise thousands for charity in Leeds 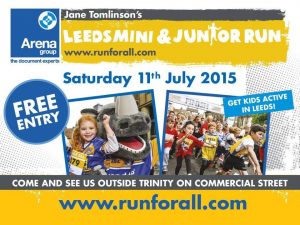 More than 1,000 kids will be attending one of the biggest charity runs for youngsters in the region this weekend.

Kids as young as three-years-old will be lining up at Leeds Dock from 10am on Saturday July 11 to run for their chosen charity.

Every child who crosses the finish line will receive a goody bag and a medal for their inspirational efforts.

Mini and junior run event leader Lynne Preston said: “The mini and junior runs are a brilliant way for kids to get actively involved on half-marathon day and enjoy the thrill of being cheered on by crowds of spectators.”

The events have been organised by Jane Tomlinson Run For All and are part of the legacy of the late athlete and fundraiser who passed away in 2007 after losing her battle with cancer.

All children are encouraged to raise funds for the Jane Tomlinson Appeal or a charity of their choice.

This year’s appeal will be supporting Sunshine and Smiles,a Leeds-based charity which offers a support network for children and young people who have Down Syndrome.

The runs are sponsored by Wakefield-based Arena Group.

For more details on the Arena Group mini and junior runs or other running events go to www.runforall.com