Students have expressed their frustration after the University of Leeds suffered a power cut this morning.

While not all of the buildings on site were affected, students and staff in the areas of Chemistry, Media, English, Physics, Music and Education were told to work from home due to their core buildings losing power.

Among the buildings affected was the Brotherton Library which was also closed.

While some viewed it as a day to get their Christmas shopping done, some were concerned due to the end of term approaching, which means that there are major deadlines coming up soon.

Those caught up in the outage took to Twitter with their feelings: 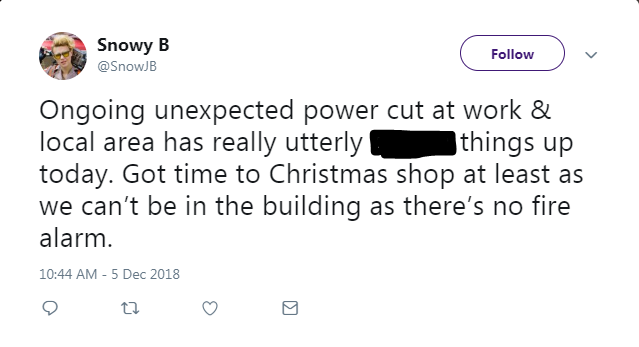 Power out at Leeds uni. Undergrads are powering on with pen and paper. Postgrads searching for a candle and an abacus

Currently it is unclear as to when the power will come back on. It is believed that things should return to normal tomorrow but students are urged to check updates on the student website, or by following @UoLStudents and @UniLeedsStaff  on Twitter.

Leeds General Infirmary was also affected by the power outage.

A statement on their website said: “This morning we experienced an electrical issue that triggered generators across the LGI site. Power to some areas was disrupted which meant having to postpone some procedures and appointments to ensure patient safety. We apologise to any patients affected by this.

“Power to our LGI site has now been restored with our services returning to normal. Urgent and emergency procedures have safely continued throughout.”