ROVERS AT WEMBLEY: 10 YEARS ON

May 25 2008. A day that will live long in the memory for all connected with Doncaster Rovers. Almost 10 years ago, Rovers defied the odds and defeated the famous Leeds United at the new Wembley Stadium, sealing promotion to the second tier of English football for the first time in 50 years.

Just 20 days earlier, Rovers, then in second place League One, needed to win at relegation-threatened Cheltenham Town to earn automatic promotion to the Championship.

Rovers faced Southend United in the two-legged semi-final, grinding out a 0-0 draw away at Roots Hall, with 10 men for the majority of the game.

A tie at the Keepmoat Stadium would be a shoot-out for a place at Wembley, and it was Rovers who took control.

For Rovers’ captain, Brian Stock it was a proud moment. His side showed great mentality to come back from defeat on the final day of the season, and he feels that the spirit within the Rovers camp was what gave them the edge.

“We showed a lot of character, we suffered a bad result on the final day having been in pole position for promotion, but we knew we had to bounce back and we wanted to go to Southend and get a good result for the second leg,” said Stock, who at the age of 36 is now with National League South promotion chasers, Havant and Waterlooville.

“We did really well to get the 0-0 draw despite Paul Heffernan getting sent off, but the lads showed great character in that game to set us up for the second leg and we destroyed Southend on the day.”

A James Coppinger hat-trick of the highest quality, with an Adam Barrett own-goal and a Stock penalty sealed Rovers’ place in the final. 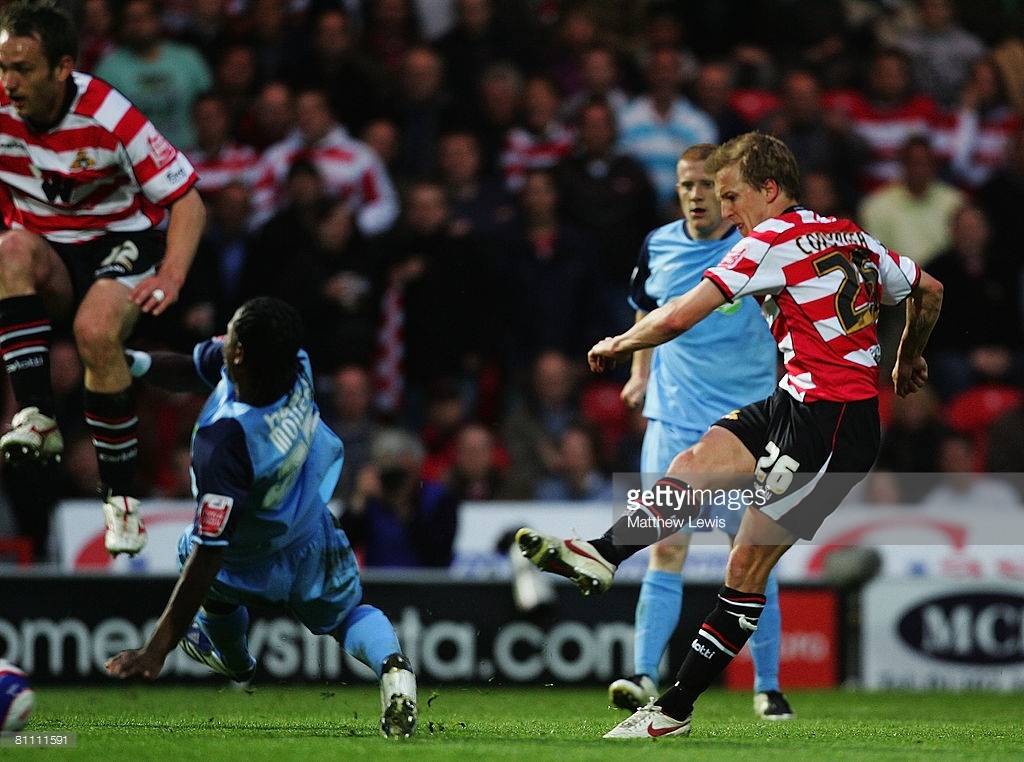 James Coppinger’s stunning hat-trick against Southend United in the play-off semi-final second leg sealed Rovers place in the final – Coppinger is the only remaining member of the promotion-winning squad left at Rovers, where he now captains the side.

This would see 75,000 fans travelling down to London to see two sides from Yorkshire battle it out for a place in the Championship.

Leeds were arguably the best side in League One. Initially managed by Dennis Wise, former player Gary McAllister took over in January and United made the play-offs, despite a 15-point deduction before the campaign had started.

Rovers went into the game as massive underdogs. Missing one of their best players through suspension, as well as facing players who would go on to make moves into the Premier League, nobody had given the third-placed side a chance.

However, with everything against them, and Leeds fans massively outnumbering Rovers fans, it was David who trounced Goliath, and thanks to James Hayter’s 48th minute header in front of the Rovers’ fans, it was they who prevailed.

Hayter also looks back on the final 10 years ago with fondness. The scorer of one of the most famous goals in Doncaster Rovers’ history, the veteran striker says the camp didn’t let their underdog status affect them, and that the South Yorkshire side would go under the radar to achieve promotion.

“Leeds were the favourites, so the pressure was off us, they were a much bigger club who without their points deduction would’ve gone up automatically, but after the semi-final, we were quietly confident we’d win, and we did” said Hayter. 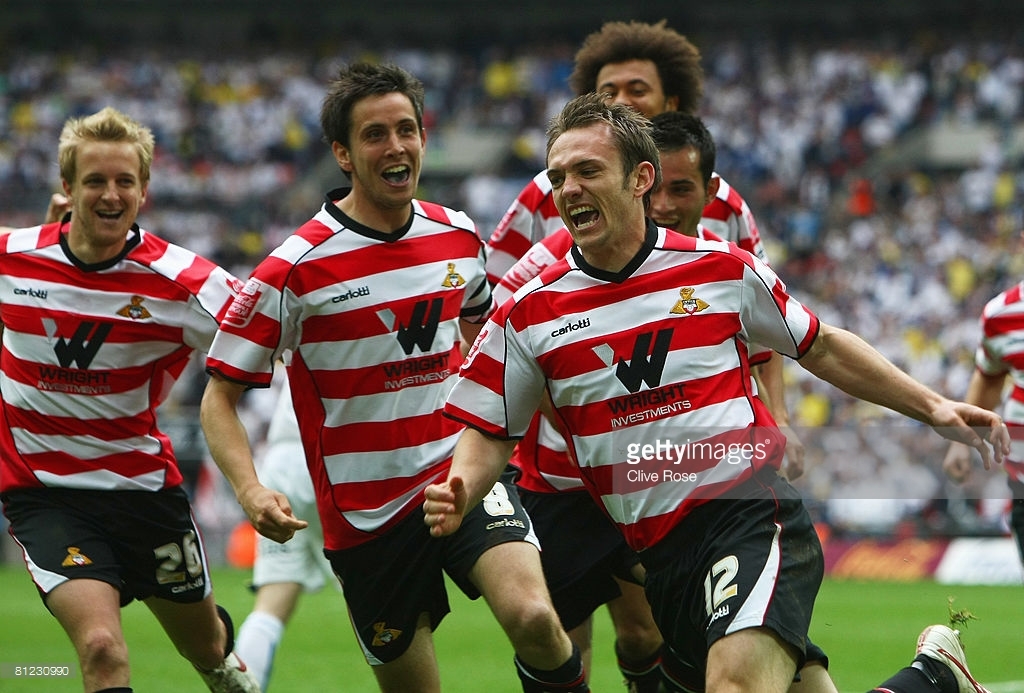 James Hayter wheels away in celebration, closely followed by Stock and James Coppinger, after scoring what turned out to be the winning goal in the play-off final.

“To go up how we did was brilliant, I’d left Bournemouth after being there a long time, as it turned out, they went down the same year, so it was a great feeling to get promoted in my first season with Doncaster.

“I enjoyed my time at Doncaster a lot, we had four great seasons in the Championship, I made some great friends and they were a great set of lads, football wise it was the best time.”

And in a bizarre twist of fate, having both gone their separate ways from Doncaster following Rovers’ relegation from the Championship in 2012, it seems that 10 years on from success at Wembley, history could be repeating itself near the south coast.

Like Stock, Hayter is on the books at Havant and Waterlooville, and the two are now at their third club together, both starting out at Bournemouth.

With both now linking up in the National League South, they are chasing another promotion, as the pair helped the Hawks win the Isthmian League Premier Division last season, and now sit top of English football’s sixth tier. 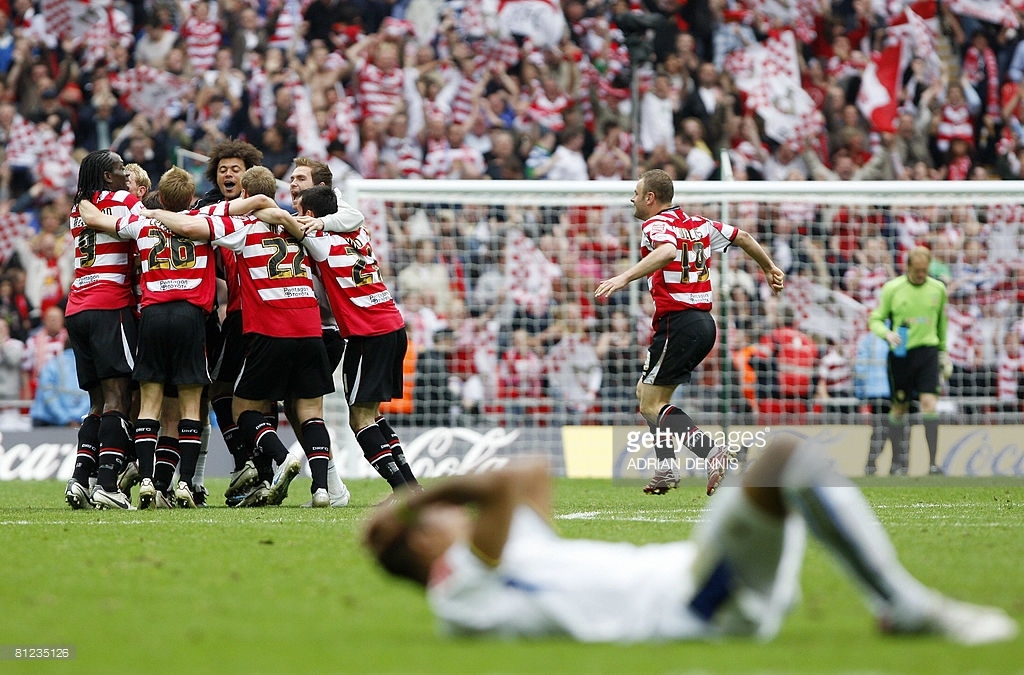 Rovers’ Class of ’08 celebrate promotion to the Championship after their 1-0 victory over Leeds United at Wembley Stadium – now Stock and Hayter hope they can recreate promotion glory with Havant and Waterlooville.

For Stock and Hayter, things have come full circle, and 10 years on from the former Rovers’ captain’s corner being met by Hayter, Stock says that the link-up between the two is still going strong, and it doesn’t look like stopping just yet.

“Even in training he scores goal after goal, and every now and again I set him up, we’ve linked up well over the years, I think we’re almost telepathic now, he knows where a ball can go, and he doesn’t need many chances to score,” Stock admired.

Although Stock and Hayter are reaching the end of their careers, both are still enjoying their football, and still enjoying linking up with each other. They will now be looking to be just as successful with the Hawks this year, as they were 10 years ago.

previousROVERS LAYING FOUNDATIONS FOR SUCCESS
nextLeeds Trinity Point Guard set to return from injury but is he still first choice?