PENSIONERS TURNED film directors for a premiere of their short-films at Hyde Park Picture House – as part of a new project in Leeds for over 65s.

Twenty pensioners made short films, including 86-year-old actor Terry Waddington who starred in All Creatures Great and Small as Mr. Weeting and still owns his own production company. 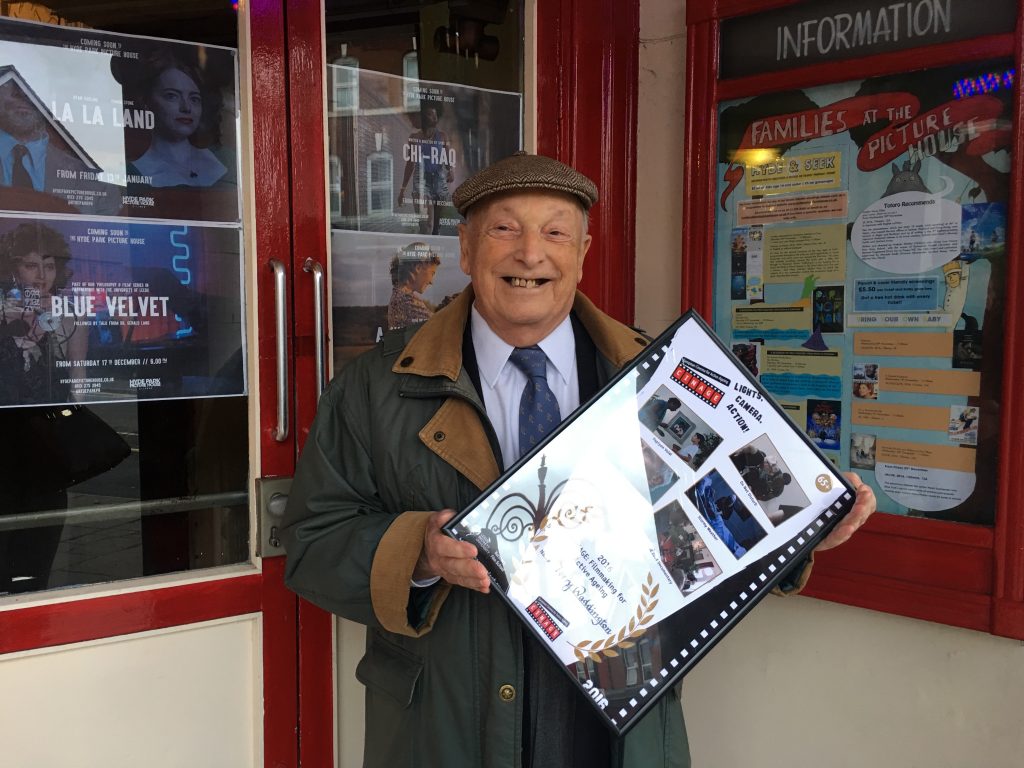 Terry Waddington with his directing award

Born and bred Yorkshireman Terry said: “I was worried about starting the course because I didn’t know what it would be like to work in a team again.

“Even though I was anxious about it, I absolutely loved every minute.”

Terry was the director of the short film Do Not Disturb!, a comedy about the activities the elderly have to do when at a nursing home.

Another budding Spielberg is Roy Sayers, a 67-year-old who is an ex-mathematician and a complete novice to the film industry.

Roy had a few problems working with Terry on Do Not Disturb! as he was the script-writer and had a different vision to director Terry.

He added: “I had to compromise during the process with my team as my view was completely different to others.

“All in all, I would love to do something like this again and would recommend it to anyone wanting some experience in filmmaking.”

The four short-stories made by the senior citizens all had a theme of the trials and tribulations that come with getting older.

The films varied from a politically messaged film called Trapped where a man has locked himself in his daughter’s porch and uses a Brexit poster to have a wee through the letter box and an emotional film called Stormy Weather about the passing of a loved one.

All twenty participants focussed on four films and worked as a team to produce them.

The Northern Film School at Leeds Beckett University led the project in England and give people over the age of 65 an opportunity to write, direct, produce and star in their own films.

Jennifer Granville, project leader and principal lecturer at the School of Film, Music and Performing Arts, said: “Current Northern Film School and alumni have been integral in the production of the four short films, making CINAGE a truly intergenerational and collaborative learning experience.”

The CINAGE project is a European project focused on active ageing and takes part every year in Portugal, England, Italy and Slovenia.

The filmmaking course will run again next year but they are now introducing a course that will give over 60s the opportunity to participate in, and to make, original contemporary theatre.

For more information contact Dave Turner, a project leader of CINAGE at d.p.turner@leedsbeckett.ac.uk.

previousMan reported missing from Hunslet area of Leeds
nextIs it possible to survive Christmas on a student budget?