Free Wi-Fi and other services announced for Bradford bus passengers 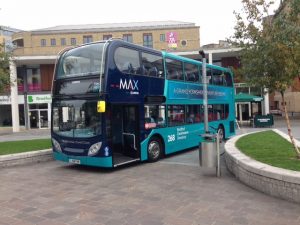 Bus Company, Arriva, announced a number of new services, including free Wi-Fi that will be rolled along their routes in Bradford, which they said will provide a better service for passengers.

Other services that have been launched on the 268 route from Bradford to Dewsbury include clearer signs that show where the bus is going and a newArriva app that allows users to monitor a bus’s current location.

The new service will include free Wi-Fi for Bradford passengers.

Ashton, believes the new service will provide another option for car drivers who may be frustrated with congestion problems in the city.

He said: “The roads are getting more congested and part of reducing the congestion is getting people onto buses.

“We believe that by offering people this service we will be playing our part in reducing the congestion.”

Mr Ashton added: “When customers get on our vehicles they want to enjoy the experience and make the most of their time on the bus.

“TheWi-Fi, especially, will make it a productive time in that person’s day instead of sitting and just waiting to get to their destination.”

Arriva said they want 35,000 people to use the service and hoped that a £4.60 day ticket, that can be used to go anywhere in West Yorkshire, will attract more passengers to the service.

For more updates from in and around Bradford, tune into 106.6 fm and follow us on twitter @bcbnews