Excitement is building ahead of Castleford Tigers Ladies launch night 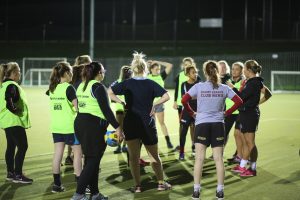 Following months of hard work the Castleford Tigers Ladies are finally preparing for their launch night as the new season draws ever closer.

Head coach, Lindsay Anfield, said: “I am greatly looking forward to meeting all the sponsors and seeing the girls receive their shirts on Monday; a reward for all their hard work and commitment.”

“I also look forward to our first season as Castleford Tigers Ladies and hope the town of Castleford will give us as much support as they give the men. “

The event, which takes place on the 6th of February, will see the players receive their playing jerseys and squad numbers while Castleford Tigers chief executive, Steve Gill, and men’s head coach, Daryl Powell, will give a short speech.

First team players, Mike McMeeken and Matt Cook, will also be at the event as the club celebrates the start of a new chapter.

Jasmine Rowley, who is part of the women’s squad, said: “I’m really excited because it’s going to be interesting to see who has which shirt and who’s in which position.”

Rowley also praised the set up saying: “The facilities are amazing. We are using the same facilities as the men do for the Super League so for the ladies to have the same access is amazing.”

With the new season set to begin in March, work is well under way to make the first campaign a successful one. The upcoming launch night is certainly promising to be a milestone moment for the new team and many have high hopes for the future.