An exciting array of events – including an annual international bike race for Yorkshire – were unveiled today to mark the 100-day countdown to the Tour de France. 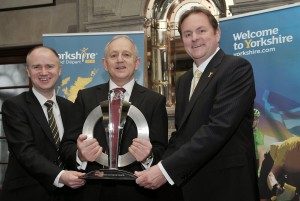 Plans for an annual three-day elite cycling event starting next year were announced, along with the first performance the Grand Départ’s official anthem, The Road, sung by York musician Alistair Griffin, accompanied by the Grimethorpe Colliery Band.

The Yorkshire Festival was also launched, which will feature a host of cultural and arts events in the run up to Le Tour, which sets off from the Headrow in Leeds on July 5.

Mr Clegg, MP for Sheffield Hallam, said: “I am delighted to continue supporting the Yorkshire Festival 2014, the first ever arts festival to mark 100 days to go until the Tour de France.

“This is a great opportunity to showcase Yorkshire’s unique culture and boost local businesses as we gear up for the Grand Départ, which will bring in millions of pounds of investment to the region.

“I’m looking forward to lending a hand to the Sheffield Steel Peloton as part of the festival and I hope as many people as possible will get involved so we can show the rest of the world what Yorkshire is all about.”

Welcome to Yorkshire chief executive Gary Verity told the Y14 conference he wanted to create a lasting legacy in the region: “It is our vision to make Yorkshire the cycling capital of Europe. There will only be one winner in the Tour de France and that’s Yorkshire.

“Tour De France 2014 is the start of the journey not the end. When Yorkshire works together we can achieve spectacular things.”

Headline events of the Yorkshire Festival will include a theatre adaptation of classic 1969 film Kes, and Bike Story – an event showcasing cycling stories from all over Yorkshire.

Daisy said: “It is a whole collection of home movies of people cycling away, including a bear on a bicycle and a woman on a pedalo floating across the channel, and it is all really good fun.”

It will also include one of Ridley Scott’s first ever films from his teenage years, which was centred round cycling.

“It is going to showcase the most beautiful locations of Yorkshire, all of them being National Trust centres. It will be amazing,” said Daisy.

Other events in the run up to Le Tour include firefighters from West Yorkshire completing a 650-mile cycling challenge through five countries from Todmorden to its twin town of Bramsche in Germany.

Watch commander Carl Fielden said: “It’s going to be a tough challenge and we really hope the weather holds out for us! I think there’s going to be a few saddle-sore cyclists by the end of it!

“The Tour de France visiting Yorkshire gave us the idea and by the time July comes around there will be a real buzz of excitement in the air.”

The team hopes to raise £3,000 to split between the FireFighters Charity, the Yorkshire Air Ambulance and Save the Children.