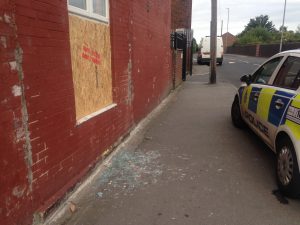 An explosion which sparked a bomb scare in East End Park, Leeds, last night left one resident collapsed on the ground in shock.

Police are still investigating the cause of the explosion, but they believe a bag of fireworks was thrown through a ground floor window on Clark Mount while a number of people who were upstairs escaped unhurt.

Bernie Shearers, 31, lives nearby and said: “One of the lads from the house ran out and collapsed on the floor. You could see the relief on his face that he was alive.”

Acting Detective Inspector James Entwistle, of Leeds District CID, said: “Thankfully no-one was injured although the consequences could have been much worse.”

Audrey Henderson, 81, a neighbour, told Yorkshire Voice that she shook as she opened the door to look outside, and didn’t know what sort of scene she would face.

Shortly after the blast, residents were evacuated and roads were closed while a bomb disposal team was deployed. Around 10pm the area was declared safe and people returned to their homes.

Police say the nature of this incident is a cause for concern and they are carrying out extensive inquiries to establish the full circumstances and trace those responsible.

Det Ins Entwistle said: “We have already spoken to a number of witnesses but we would like to hear from anyone who saw anyone acting suspiciously in the time leading up to the incident or who has any information that could assist the investigation.”

Anyone with information is asked to contact Leeds District CID at Elland Road via 101 or call Crimestoppers anonymously on 0800 555 111.

previousNews wrap: Wednesday 22/7/15
nextMurder of a Bradford man under investigation