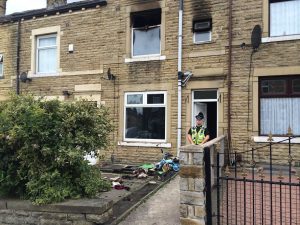 THREE children, including a three-month-old baby, were rushed to hospital after a house fire in Bradford late last night.

Three children were rushed to hospital after a house fire broke out in Bradford, yesterday evening.

The family of eight were at their home on Durham Road in Manningham, when the fire broke out, shortly before 11pm last night.

The 28-year-old father of the family – who didn’t want to be named – told Yorkshire Voice that that all the children are now safe and well.

The fire is thought to have started in the bedroom and has left such damage to the building that the family cannot stay in the house.

Neighbour and taxi driver Muhammed Taj, had just finished his shift and returning home when he saw the flames coming from the first floor window.

When fire crews from Bradford and Fairweather Green stations arrived they found the property was well alight although the family had managed to get out.

Police and the local fire authorities team are investigating what may have caused the blaze.

previousUPDATE: Men released on bail after arrests in connection with Bradford murder
nextLeeds PCSOs will not be scrapped but cuts are likely