The King to grace Leeds Irish Centre for St Gemma’s 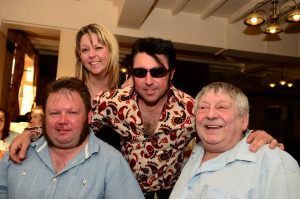 Leeds Irish Centre will be ‘shook up’ by an Elvis tribute act in support of St. Gemma’s Hospice on Thursday.

Singer Dean Holland, 40, of Seacroft, says the charity holds a special place in his heart: “It’s always been very personal to my family.

“My mum Anne worked at the hospice for three years, and my sister Gemma was named after it.”

Mr Holland also has a connection to the hospice through his father, Barrie James Holland, who was going to be admitted when he fell ill with terminal cancer and his care became too much for his mother and sister.

Mr Holland said: “When they came to collect my Dad it was too late, they told us he would have died in transport. He passed away two hours later.”

The singer has been a professional Elvis tribute act for five years, and said he and his sister were brought up on Elvis.

He is currently putting the finishing touches on his act in time for Thursday, in collaboration with fellow Elvis tribute act Carn C. Ryder, who will also be performing.

Tara Bean, a fundraiser from St. Gemma’s Hospice, said: “We’re really grateful that this event is being organised.

“St. Gemma’s Hospice needs to raise £24,000 each day to keep everything running, so we really rely on local people who organise their own events in the community.

“The hospice is invaluable for people with life-limiting illnesses and their families.”