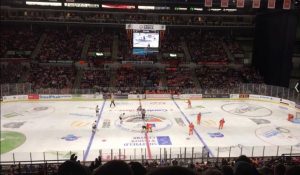 Saturday night sees the first of Sheffield’s Elite League double-header weekend against the Belfast Giants at the Sheffield Arena.

Less than a minute in and already two stoppages as both sides go off-side.

1:06 gone in the first period and the Steelers head to the Powerplay. Mark Garside sits for two minutes with a hooking call.

Belfast kill the first penalty of the game, as the penalty kill offer Sheffield very little in terms of setting up in the offensive zone.

4:40 and David Rutherford works his magic dekeing around Jace Coyle before forcing a save out of Ervins Mustukovs.

GOAL! 5:38 Chris Higgins at the second time of asking flutters a shot beyond #33. Assisted by Mike Forney and Jim Vandermeer

GOAL! 8:27 Very little happening between the two goals, as Mike Quesnele find the open goal after good work from Blair Riley on the boards. Assists to Riley and Vandermeer

Penalty against the Belfast Giants. Boxill gets two minutes for tripping at 10:01

A much more offensive powerplay for the home side gets cut short as referee Tom Darnell calls Andreas Valdix for hooking at 10:57

11:56 and Markus Nilsson skates his way into the zone and forces a save from Jackson Whistle as Belfast return to full strength.

GOAL! 12:51. A remarkable save from Mustukovs wasn’t enough to stop David Rutherford from smashing in the rebound into again another unguarded net. Assists to Higgins and Riley

POST! Mike Ratchuk snipes a wrist shot against the Giants upright as Sheffield build much needed pressure on the visitors

GOAL! 4-0. Could that be game over? David Rutherford again at the back door gets his second of the night. Assists to Forney and Riley

Wonderful first period from the away side. First to every loose puck. Sheffield have a massive task if they wan to overcome this deficit.

Promising start by Paul Thompsons side. Camped in the Giants end and they force another penalty. This time for delay of game 2:30

Another poor Powerplay ends with the Steelers misplaying a pass and giving up an icing call. Belfast return to five skaters

24:42 gone and Belfast break into the Sheffield zone but miss a glorious chance to add a fifth

Steelers come close as Armstrong hits the outside of the post. And it gets worse as they are now guilty of a two many men call. Timed at 27:47

GOAL! 5-0 to the Giants now. A HUGE hit in centre ice from Davey Phillips gives up a two on 0 breakaway and it’s all to easy.

GOAL! The Steelers are on the board. Colton Fretter stays red hot as he tips home a Roy Slapshot . 35:06

Another 2 on 1 for the Giants again goes to waste. Steelers giving up some very bad passes

39:39. Davey Phillips is penalised for hooking after the Giants AGAIN break in behind the Steelers

Sheffield begin the final period on the Penalty Kill. A gigantic task for them to overcome the four goal deficit

45:00 minutes have passed and Belfast still by far the superior side. Excellent transition and all forward lines look a threat

46:48 and Sheffield are blown down for icing. The arena is currently being serenaded by the marvellous travelling support from Ireland

Icing call against the Giants. This game has gone pretty flat. Walser and his roster deserve huge amounts of credit for killing the game off so early on and sticking to a plan.

PENALTY SHOT! Colton Fretter almost replicates his goals away at Cardiff and Nottingham as he superbly shields the puck from the defender drawing the hooking call

MISSED! Fretter wrists his shot high and over the bar. Snaps his tick in frustration and that sums up the night as a whole

Another penalty, this time against the Steelers. ANOTHER hooking call, really not whats needed

Chances are hard to come by now, as Whistle dives on a loose puck. Certainly missing some offensive spark.

Into the final five minutes of this game and it seems like its all numerical now as Belfast are happy to shut down the game completely.

58:40 A small discussion between the on ice officials conclude Nelsons shot hits the post and not the back of the net. No goal

59:24 Ferrara gets Sheffield’s second goal. All over however.

60:00 Game over. Belfast clinical early doors to put Sheffield out of sight. A great result as the race for the title hots up

That’s all from me. Unfortunately tomorrow nights game wont be live blogged but there will be a full aftermath piece released early next week.