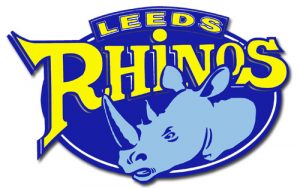 Although it was only a pre-season game, there was much for Rhinos fans to get excited about, including the debut of hooker Matt Parcell, recently acquired from Manly Sea Eagles to replace James Segeyaro.

There were first half tries from Jamie Jones-Buchanan and Rob Burrow. Burrow also converted Jones-Buchanan’s try as well as his own, while Shaw missed a difficult conversion from the touchline after going over himself. Ryan Shaw also scored a try for KR to keep them within reach of a comeback.

Despite a close first half, Rhinos dominated the second half. Veteran stand-off Danny McGuire rolled back the years to run in a try after a Burrow line break. The two players showing fans what they’ll be missing next season as the pair plan to retire at the end of the 2017 season.

Australian Mitch Garbutt charged his way through for Rhinos’ fourth try as the game looked out of reach for KR. The final nail in the coffin came when Ryan Hall managed to knock down a cross field kick for centre Jimmy Keinhorst to score the try. Hall then kicked the conversion himself, much to the delight of the Leeds fans in the stadium. 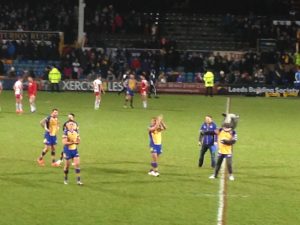 The Rhinos celebrate a fine victory

Hull’s travelling support were out in force to see how their side was shaping up ahead of the new championship season. Stand-off Jordan Abdull, on loan from rivals Hull FC, is expected to have a big season and many were watching him with high expectations.

One Rhinos player with a point to prove this seson is full back Ashton Golding. Some questioned the decision to give him the number one shirt this season, but he put it in a solid performance against KR, making good runs and safely catching a number of high balls.

Following the game, Ryan Hall was given a microphone and spoke about his time at the club, as well as thanking the fans for coming out to watch. He also received the man of the match award. Judging by Friday night, both teams look raring to go for the season ahead.