In light of the COVID-19 pandemic, Captain Tom Moore and Michael Ball have sung a stirring duet together, to raise money for the NHS.

Captain Tom Moore, a 99-year-old war veteran had already single-handedly raised over £26 million for the NHS on his Just Giving Page, by walking a hundred laps of his garden before his one-hundredth birthday at the end of the month. He completed his final 10 laps on Thursday April 16. He then collaborated with Michael Ball to record the Rodgers and Hammerstein classic song, ”You’ll Never Walk Alone”, to raise even more money. 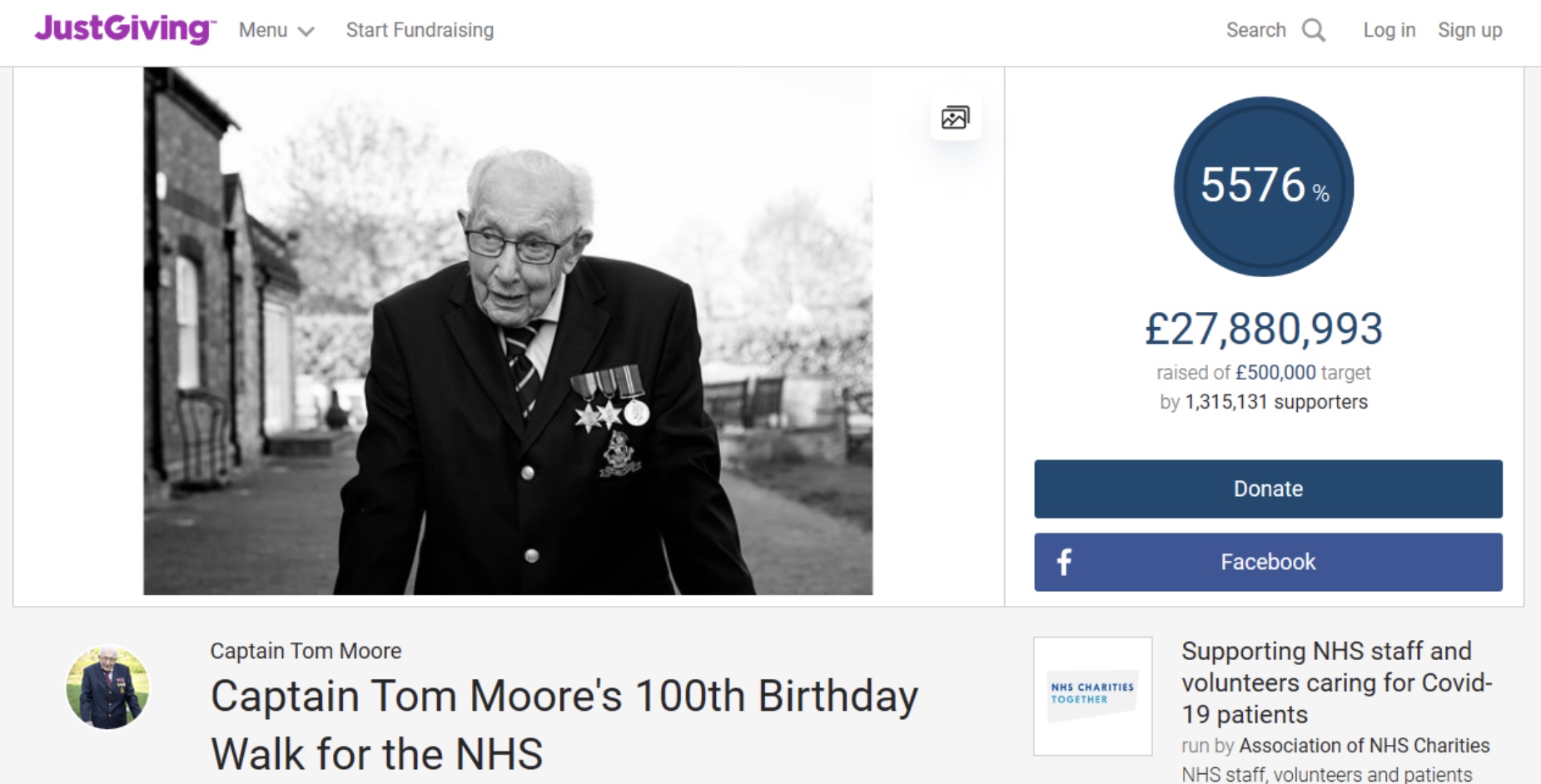 Captain Tom Moore’s JustGiving page, where the amount of donations are constantly rising. Here shows that Captain Tom has raised 5567% over his initial target of £1000.

Within 24 hours of Michael Ball speaking to Captain Tom on BBC Breakfast, the pair teamed up and recorded the tune.

The single is available to stream and download now, with all profits going towards Captain Tom’s fund which will be given to the NHS Charities Together to support the wonderful NHS staff and volunteers taking care of COVID-19 patients.

Upon its release, the heartwarming and uplifting version of the 1945 classic narrowly beat Vera Lynn and Katherine Jenkin’s heartfelt rendition of ”We’ll Meet Again” to first place in the iTunes charts.

The song, which was originally written for the musical, Carousel, saw a swell in popularity when it was covered by Gerry & The Pacemakers in 1963 and later became a number 1 hit in the charts. This means that Michael Ball and Captain Tom’s version of the song is the third to reach the top of the charts. 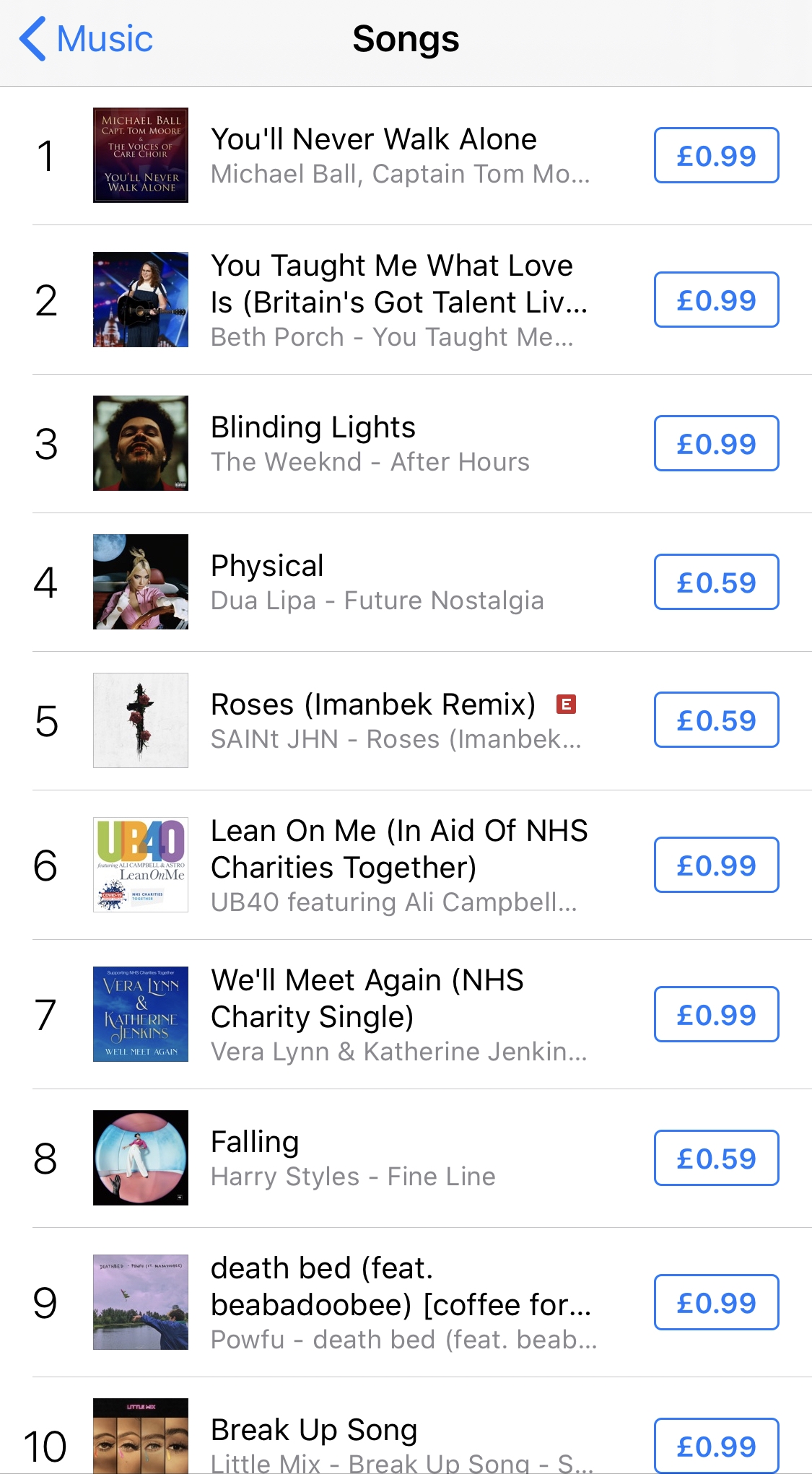 The track, which according to The Daily Mail, ‘has become an anthem for medical staff during the pandemic’, begins with a spoken word introduction from Captain Tom, saying: ‘Hold your head up high and don’t be afraid of the dark.’, Michael Ball then leads the vocals, before the NHS Voices for Care Choir feature.

Michael Ball thanked the ‘amazing’ NHS Voices for Care Choir on his Twitter, and called Captain Tom an ‘inspiration ‘- something I’m sure we can all agree with as a Nation! Ball was also sure to emphasise that 100% of proceeds will be going to the NHS.

In my opinion, this song is well worth a listen and download! Many of us are struggling in lockdown and I found this it to be so sweet and inspiring. The words really spoke to me at such a difficult time and knowing it is for a good cause really raised my spirits.

However, this isn’t the only single to be at the top of the charts in support of the NHS. UB40’s version of Bill Wither’s 1972 hit, ‘Lean On Me’ is currently in sixth position, closely followed by Lynn and Jenkin’s rendition of Ross Parker and Hughie Charles’ 1939 classic, ”We’ll Meet Again”. It’s incredible to see that all three tracks have reached the iTunes top 10 and are giving the proceeds to such a wonderful cause.

So get listening and downloading, let’s support the NHS and get through the pandemic together. If nothing else, these uplifting tracks are sure to brighten up your day.

previousBaby Yoda and baby tigers: 5 series you should binge watch during lockdown
nextGirls on Canvas: A review of ‘Portrait of a Lady on Fire’