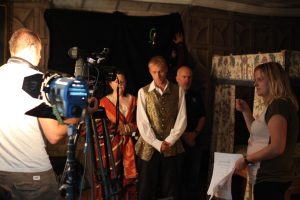 Director Katie Ross (right) has high hopes for the film.

A Leeds production company and acting academy has had a short film accepted into the 67th Cannes Film Festival.

VIII, made by Rossi Pictures Ltd, has been selected for the prestigious Short Film Corner where it will be viewed by some of the most influential people in the industry, including Cannes’ representatives and investors.

VIII is the story about Henry VIII’s reign and covers the details of his various marriages, executions and his relationship with the Catholic Church – with a twist. The film does not shy away from the controversies of his reign with the themes of sex, power, greed and death all featuring heavily.

All the cast featured in the film, including Yorkshire Voice reporter Mark Kielesz-Levine, attend local acting school, IPM Acting Academy, based in the hub of Leeds television and film industry on Kirkstall Road. The final film was penned and then directed by company director Katie Ross.

Katie said: “I’m honoured to even be considered to feature our film at Cannes, it is after all the biggest, most prestigious film festival in the world.”

Katie has a long history within the television and film industry working on television productions including Emmerdale, The Royal and A Touch of Frost as well as films starring Micheal Caine, Ewan McGreggor and Jane Horrocks. Rossi Pictures Ltd was established with Stewart Ross in 2013 with the aim of creating innovative and pioneering material.

Cannes Film Festival takes place between May 14 and 25.