Leeds boxer Warrington has fight at Elland Road in his sights 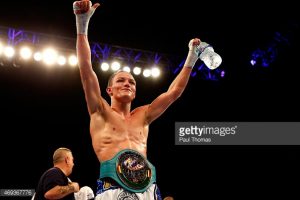 Warrington’s promoters have opened negotiations for the unbeaten fighter to face Selby, a bout he has been eagerly anticipating.

His next fight, however, will again be fought at the Leeds First Direct Arena, on May 13, potentially against Kiko Martinez.

“I’m sick of hearing his [Selby’s] name,” Warrington told Sporting Life. “If the contract gets put to me tomorrow, I’ll sign it.

“If he comes to Leeds, he’s getting beat. Simple as that.

“Selby has been spoken about for so long now that everyone is gasping for it to happen.

“It would be more than a dream to fight at Elland Road – it would be incredible. My perfect 2017 would be for Leeds United to be promoted and me to win a world title.

“But I can’t look past May 13 and hopefully it will be Kiko Martinez. Martinez is a big name and I need a big fight and the people of Leeds want to see a big fight.”

In that time, though, Warrington has moved from promotors Matchroom Boxing to Frank Warren Promotions, in a bid to secure a world title fight.

The 26-year old has also had minor elbow surgery whilst on the sidelines.

Warrington has built a significant fanbase in Leeds but will now also share the limelight with Olympic medallist Nicola Adams, who has recently turned pro herself.

Adams, also from Leeds, will be on the ‘Leeds Warrior’s’ undercard for the May 13 fight, though she has no confirmed opponent yet.