A cancer sufferer on two separate occasions is canoeing from Liverpool to Goole to raise money for the support charity that helped him and his family.

Andrew Wellock, 55, from Briery Close, Ilkley and his friend Andrew Lambert will be canoeing from Liverpool to Goole along the Leeds and Liverpool Canal and the Aire and Calder navigation within seven days.

They will need to average more than 22 miles a day.

Three years ago, Andrew, a maintenance contractor was diagnosed with cancer on the tongue. Following surgery, the cancer returned in his neck, which required further surgery as well as chemotherapy and radiotherapy.

Now the cancer has gone, Andrew has decided to give something back to Cancer Support Yorkshire, who helped him and his family get through his treatment.

Cancer Support Yorkshire is a local independent charity who help people with a cancer diagnosis and also support the other members of the family.

Father of two Andrew said: “Cancer Support Yorkshire helped me and my family hugely and it’s time to give something back.

“They do a huge amount for patients and families suffering from cancer during and after treatment, and we want to do as much as we can so we can finance the wonderful work that they do.”

Andrew has been inspired to do the challenge by his 16-year-old daughter Hannah, she and a group of her friends from Ilkley Grammar School have been raising money for Cancer Support Yorkshire whilst studying for their GCSEs.

Hannah, has organised events such as bake sales and even a school concert, and she has raised nearly £8000.

Andrew said: “For her and her friends to do that at the same time as her GCSEs is just fantastic and it made me think, if they can do that, then what can I do?”

The journey is already difficult enough for Andrew, but there is one difficulty which only he will face.

Because of the cancer on the tongue, and the treatment that has gone with it, Andrew no longer has any salivary glands meaning that he has no saliva. This means that he constantly has to keep drinking water so that he does not dehydrate.

Andrew said that for the amount of extra water he has to drink, it means that there has to be more toilet stops along the way. 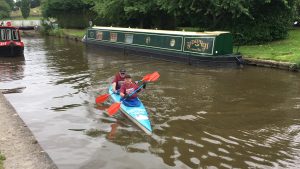 Andrew Wellock and Andrew Lambert training at the canal in Kildwick

Caroline Lewis from Cancer Support Yorkshire said: “They’re not young men, but they seem to be flying on with this training and the dedication is amazing, I’m really proud of them.”

She added: “There is even talk about what they want to do next year which is just amazing.”

Andrew is hoping to raise over £5000, and you can donate by visiting: https://www.justgiving.com/fundraising/andrew-lambert9