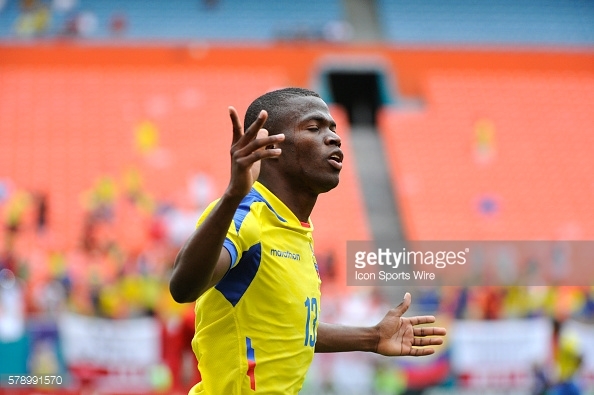 A ROW over claims that Everton’s on-loan striker Enner Valencia owes about £13,000 in child maintenance debts have been branded an embarrassment to the club.

The Toffees forward has attempted to set the record straight in a post on Instagram after allegations by his former partner and mother of his five-year-old daughter surfaced last week.

The post however, has left fans of the Merseyside club more confused.

Simon Paul, 39, editor of Everton fan site NSNO.co.uk, said: “It’s all bizarre really, it seems a bit like what you’d see on a comedy show, but worse.

“His Instagram post was meant to clarify what went on but it just made it less clear.

“(If the reports are correct) the amount of money owed is incredible, especially where he’s from, it could set the family up for a while.

“Fans have no attachment to him at all, if he didn’t play for Everton (the fans) would be laughing, I don’t get it, why have we taken him in?”

During a World Cup qualifier in his home country against Chile, the 26-year-old Ecuadorian was caught on camera apparently being chased by police as he was wheeled from the side-lines towards an ambulance, after complaining of altitude sickness.

Video footage of the incident has been posted on YouTube following the event.

In his statement, Valencia said: “I personally feel the obligation to explain the truth of these matters to honour my family as well as my personal and professional image.

“I decided to take legal action and ask for my daughter’s custody. It is my intention to bring my daughter Biera to live and study in the UK, where I am based at the moment due to my professional activities; so she can grow up within a stable family environment and under all the necessary conditions for her development.

“(The mother) Mrs Synthia Pinargorte Chumo organised within the last few days ridiculous persecution shows against me; with clear intentions of damaging my image as a responsible father.”

Justine Roberts, CEO of Mumsnet, said: “If Valencia is avoiding child maintenance, he’s not alone. Arrears in the UK stand at around £4bn, which is an awful lot of children going without.

“Mumsnet users tend to think that both parents should step up fully when it comes to providing for their kids – no excuses, and no hiding in ambulances.”

Everton Football Club has been contacted for a comment but had not yet responded at the time of publication.