Emotional farewell for Horsforth postmaster after 14 years of service 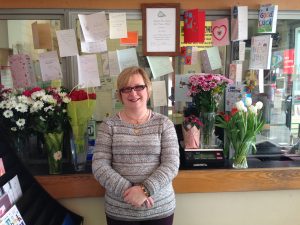 A much loved post master has left her stamp on Horsforth today as she closed her doors for the last time.

Jan Hardy, 51, was inundated with flowers and gifts from users of The Post Office on Alexandra Road, has been open for fourteen years but closed today at 12:30pm due to the relocation of the store.

Mrs Hardy, of Alexandra Road who was awarded Horsforth Town Council Good Citizen in 2012 and has regularly served members of the Emmerdale cast, said she had known about the closure for about a year but today was still upsetting.

Mrs Hardy said:  “Before opening the Post Office I used to live in Huddersfield. I had three part-time jobs, but as I had three young children I needed a stable income so I moved to Horsforth and opened the Post Office. It meant that I could be at home whenever my children needed me whilst being able to provide for them. I’ve seen so many things and become part of peoples lives working here and I will miss it.”

Well-wishers came to the store throughout the day to give cards, gifts and to say thank-you for the service Mrs Hardy has provided over the years, reducing her to tears.

Her good friend Maggie Askew, 53, from Springfield Mount said “I have known Jan since she first opened up here. I’m so sorry that it’s closing; she will definitely be missed by everyone because it’s not just a Post Office but it’s a place to come and have a chat. Jan is so nice, it really will be such a loss for everyone in the area.”

Mrs Hardy’ mother Anne Schofield, 70, of Broadgate Drive, helped her daughter close the post office and was on hand with tissues.

Mrs Schofield said “You’ve seen today that it isn’t just an end of a counter, it is a community we have here and Jan has been busy right up until closing. What a shame.”

Mrs Hardy who has ‘always worked and comes from a family of workers’ is planning to work independently in the future.

She said “The new Post Office will be open longer hours and I would be on less pay so I will not be going to the new location. I am going to spend time with my family and take some time out before working again.”

previousPiranhas part of the £1.5m Tropical World revamp
nextPlans for Facebook drugs party halted in Leeds after police step in