Business leaders scrum down for inspiration from Rugby League legend 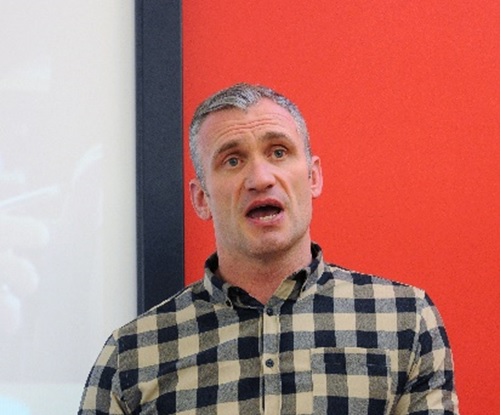 A series of presentations were given at Leeds Trinity Business Forum event about motivation for business people. Business owners from different sectors attended the event, including representatives from solicitors, charity organisations, marketing agencies and local magazines.

The first guest speaker at the event held on January 4 at Leeds Trinity University, was Jamie Peacock, with a 20 year career in Rugby League, 15 of those at the very top with Bradford Bulls, Leeds Rhinos and England.

Jamie Peacock is able to draw on no end of personal and team challenges faced during his career.  On the day, he focused on the pressures he had faced in 2005.  Bradford’s performance had slumped.  The announcement of his transfer to their bitter rival Leeds had been met with incredulity, including hate mail.  Nonetheless, Jamie’s grit and resolve was to carry him through to even greater honours with Leeds, though there can be no doubt that almost two metres and 105 kilos of athleticism helped somewhere along the way…

With more than 50 people in the room with half of them being inspirational speakers, Jamie Peacock had bought something different to offer. Other guest speakers were Robert Lattibeaudiere form The Human Experience and Alan Aucoin from 2inspire. Both Robert and Alan had similar talks which circled around New Year Resolutions and how we can try to make sure we keep them. The way Alan started his talk with a sparkling nursery rhyme beginning “If you’re happy and you know it,” was quite unique, refreshing and enjoyed by the listeners.

LTBN is approach by which LTU engages with employers to secure undergraduate and post-graduate work and work experience places.  Jess Sewter, Head of Partnerships and Placements, announced the next meeting in March and invited employers to get in touch if they might be able to take any students during the next round of six week placements, beginning April.

The next LTBN is on the March 1, 2017, venue to be confirmed. For more details contact: Y.WATCHORN@LEEDSTRINTIY.AC.UK.