A Leeds University student, who raised over £1,000 for charity, has died in the Ukraine passenger aircrash. 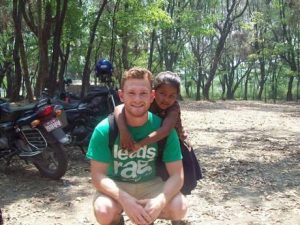 Leeds University student Richard Mayne who is believed to have died in the aircrash in the Ukraine.

20-year-old Richard Mayne, a Maths and Finance undergraduate, was among the 298 passangers and crew onboard the Malaysian Airlines flight MH17. The plane appears to have been shot down over a conflict zone on Thursday afternoon.

Leeds University said they were “very saddened” to hear of his death.

A spokeswoman said: “Our thoughts are with Richard’s family and friends. Richard had just finished his second year in Maths and Finance and he was doing well with his studies.

“Staff are working with the university’s counselling service to help students who are affected by this tradgedy and we will do everything we can to support them.”

Tributes to the rugby player have already begun appearing on social media.

We are deeply saddened to hear of the death of RAG member Richard Mayne on board MH17. Thoughts and sympathy are with his family and friends

Hearts go out to the friends & family of Richard Mayne, a popular clubman taken from us too soon. We pay tribute to an honest and kind man — LeedsUniRugbyUnion (@LURUFC) July 18, 2014

Richard Mayne was a bloody great bloke and I can’t imagine how his family and close friends must be feeling, it’s utterly horrendous news

Stalwart of a man. Shall be remembered and dearly loved for his kindness and charm by everyone @LURUFC forever #MH17 pic.twitter.com/m3vi4VVNTS

RIP Richard Mayne, thoughts to his family was a honour to share a room with him on Nepal trip wouldn’t have been the same without him — Luke Holland (@lholland94) July 18, 2014

RIP Richard Mayne, shame to lose such a great guy. @LURUFC has lost a great member

The tributes to Richard Mayne are heartwarming. A lad who is unanimously well respected and loved. #BozzyBoys

Stalwart of a man. Shall be remembered and dearly loved for his kindness and charm by everyone @LURUFC forever #MH17 pic.twitter.com/m3vi4VVNTS — James Munro (@Jamesmunro9) July 18, 2014