Yorkshire in Bloom comes to Horsforth 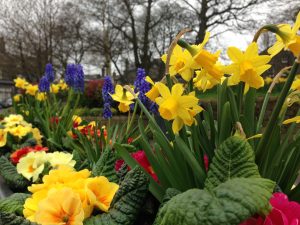 The Blooms of Horsforth

Horsforth bloomed today with the help of schools, businesses and other organisations as the town was judged for the Yorkshire in Bloom competition.

The town’s displays, which will remain through spring and summer, highlight the variety of the town.

Sharon Kayton, owner of Regent’s Fishery in Horsforth and supporter of the project, said: “It really brings people together. It encourages locals to come down to see us and it helps us to put something back into the local community.”

The projects around Horsforth were linked by swathes of yellow daffodils along the Horsforth in Bloom route to represent the yellow jersey of Tour de France.

But the competition is about more than just the flowers, environmental responsibility and local heritage were also on the competitors’ minds when they began recycling, litter picking and bird and bat box building.

Martin Fish, a Yorkshire in Bloom Judge, said: “It’s good to get the heritage of a town like this across, there’s a lot of history with the cenotaph and the war memorial and it’s important that it’s not forgotten”

Children from across the town played a particularly big part this year, with Guides, Brownies, Cadets and schools getting involved as well as the youngsters from Duckling’s.

The hard work and skills of the locals coupled with local sights such as the bluebell walk gained the town a silver award in the competition in 2013.

This year the team behind Horsforth in Bloom are looking to retain the prestigious award or go one better. 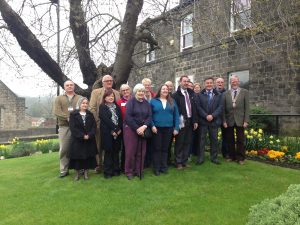 The Horsforth in Bloom Team

Horsforth in Bloom enjoys support from the council as well as local businesses and organisations.

LISTEN: Horsforth adds some bright colour to Yorkshire in Bloom

WATCH: Peter Mallot, One of Horsforth in Bloom’s major organisers, shares the inspiration behind this years theme.