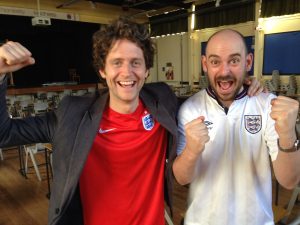 A pair of teachers are aiming to top the charts with an unofficial World Cup song, recorded to raise money for the Ann Maguire Educational Fund.

All proceeds from the single, ‘Bring It Home’, will be split between the charity set up in memory of the late Leeds teacher and the Bobby Moore fund- a charity aiming to beat bowel cancer.

Robin Parmiter, 33, and Ian Wilson, 28, from Huntington School in York, recorded the track after being disappointed with England’s official World Cup song- a reworking of the Take That tune ‘Greatest Day’, which has since been dropped by the FA.

“We never really expected to release it. We weren’t trying to get into the charts this week. But because the video went so big a company called Band Crusade, who put out unsigned bands and try to get them into the charts approached us and they gave us full control of what to do with the money that was coming in. So we decided that we would do it for charity. The first one that popped into our heads, as teachers, was Ann Maguire- it was a tragic event that happened.”

Ann Maguire, a teacher for more than 40 years, was stabbed to death at Corpus Christi College, in the Halton Moor area of Leeds, back in April.

Ian said: “There’s a charity set up in her name that helps young people in Yorkshire through creativity, music, language, dance and art- which is what we’re all about.”

The music video to accompany the charity song was filmed at Huntington School and currently has over 80,000 hits on YouTube.

Robin said: “We recorded it in about an hour and a half. We had no budget but the response has been brilliant.”

The duo are remaining hopeful about their chances of making an impact on the Official Top 40 this Sunday.

Ian said: “We’ll be sitting next to the radio, hoping to hear ourselves. Maybe in  40th position, that’d be good enough for us.”

The track is available to download on iTunes right now and more information on the charities that will benefit from ‘Bring It Home’ can be found on www.justgiving.com/ann-maguire and bobbymoorefund.cancerresearchuk.org

CLICK HERE to listen to Ian’s verdict on England’s chances in Brazil: