What has Marcelo Bielsa changed at Leeds United

Leeds United finished last season in 13th position in the Championship with 60 points under, their second permanent manager of the year the unsuited Paul Heckingbottom.

They had started that season on top form with surprise choice of manager the Spaniard Thomas Christiansen. Christiansen was sacked in early February and Leeds’s season disappeared from there and Heckingbottom was unsurprisingly sacked last summer.

Now with Bielsa at the helm of the whites there’s a fresh enthusiasm at the club. Leeds are currently second in the Championship one point behind Norwich City. So what has El Loco as he is named in his native Argentina changed at Leeds?

First of all Bielsa is a big name coach. The former Argentina boss arrived with big praise from Manchester manager Pep Guardiola calling him “the best coach in the world,” and Spurs manager Mauricio Pochettino praised his former national team boss his “footballing father.” High praise from arguably the best two managers in the Premier League.

With such a big name in the football community and high praise it wasn’t going to be hard for Bielsa to get the squad to buy into his tactics and for the fans to fully get behind him. Comparing this to his two predecessors nobody knew who Christiansen was having managed in Cyprus and the UAE. With Heckingbottom it was evident he didn’t win over the fans and key players didn’t buy into his system.

Bielsa has brought bums on seats back to Elland Road the average attendance so far in the season is over 32,000. It hasn’t been that high since the 2007/08 season.

His nickname “El Loco” comes from his personal persona and tactics. After the 1992 Copa Libertadores his Newell’s Old Boys team lost 6-0 to San Lorenzo. Fans were obviously unhappy and protested outside his home. To get them to leave Bielsa threatened them with a hand grenade “If you don’t leave, I will blow you up”.

Bielsa tactics are something that has not been seen before at Elland Road. His tactics certainly ask a lot from his players.

Bielsa asks for a lot of high pressure constantly chasing the opponents with the ball and when Leeds win it back the attack is on instantly, but the ball must stay on the deck for as long as possible no hopeful balls over the top. With the high intensity play pushing his players to the physical limit sometimes up to three times a week. It really shows that the players are backing Bielsa and willing to push themselves to their physical limits for their coach.

Pundits have linked Leeds’s fast start to Bielsa’s 2014/15 season with Marseille. Bielsa’s team were crowned symbolic “autumn champions”, after a fast start Marseille were top of the league in December. But after the Christmas break Bielsa’s side wilted into finishing fourth in the league.

Also with Bielsa’s new tactics Leeds at the moment Leeds are scoring more goals per game since Gary Monk was in charge when they finished 7th in the Championship. The Whites in fact have only failed to score in one game this season against the stubborn Middlesbrough managed by defensive mastermind Tony Pulis. 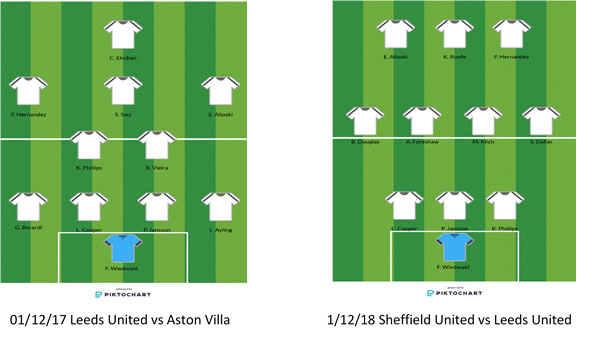 With the disappointment of the 2017/18 season you would be forgiven that Bielsa has come into Leeds and made wholesale changes. If you look at the players and formation above you see that the 11 is predominately the same squad of players to last season. A change is goal keeper was very much need, the young Northern Irish international Peacock-Farrell has been promoted from the youth team. Luke Ayling and Gaeteno Berardi missed the game versus Sheffield United injury.

Kemar Roofe last season was seen as a second choice winger behind Pablo Hernandez and Ezgjan Alioski has really taken his opportunity leading the line scoring eight goals this season. Adam Forshaw a signing in January 2018 has really provided an anchor role when in midfield called upon. Mateusz Klich has really performed well under Bielsa coming in from the cold of a loan spell back in his native Poland. In the summer Klick would’ve been one of the first one’s out the door in most Leeds fans eyes. Klich’s turn in form has seem in become a key figure in the heart of Leeds’s midfield scoring five goals and assisting five times.

Young local midfielder Kelvin Phillips has proved one of the key players this season alongside Roofe and World Cup winner Hernandez. Bielsa is using Phillips similar to the former Chile captain Gary Medal. Bielsa likes to have a physical and tactical midfielder playing as one of the centre backs. By doing this it gives Bielsa’s teams the capability of bring the ball out from the back more easily.

Overall Bielsa alongside Chairman Andrea Radrizzani, chief executive Angus Kinnear and director of football Victor Orta the ethos of Leeds United has changed since the obnoxious ownership of Massimo Cellino. The hire them and fire them days appear to be over. The message now from Leeds United seems to be a quote from legendary captain Billy Bremner “side before self everytime”.