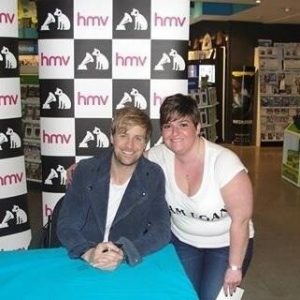 Kelly meets Kian again at his album signing in Leeds

A Westlife super-fan claims she has spent more than £6000 travelling around the country to meet idol Kian Egan.

Kelly Sherwood, 30, from Barnsley, queued for four hours to meet Kian again on Friday outside HMV in Leeds’ the Core shopping centre.

She claims she has now met him more than 50 times and said: “I could probably have gone on a world with cruise with the amount of money I have spent.”

Kian, who won last year’s I’m a Celebrity Get Me Outta Here, was signing copies of his debut solo album Home. 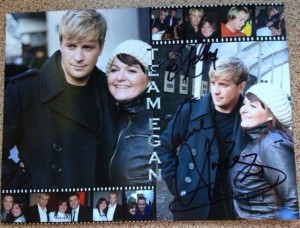 Kelly’s picture collage of her and Kian which he signed

Kelly said: “The buzz never ever goes away – I still get nervous and a dry mouth and start to shake. The minute you look up at him and see his eyes you just want to melt-you get the butterflies. It’s like the adrenaline starts going through you-it’s just amazing.”

Kelly, a supervisor at Ernest Jones jewellery store in Sheffield’s Meadowhall, says the most outlandish thing she did for Kian was camping in a cramped Vauxhall Corsa for three nights to see all of Westlife’s summer concerts.

She first saw the band when they supported Boyzone at a Sheffield concert in 1999 when she was 14.

“From then on I went to every tour to see them as I grew older. I started waiting outside hotels, TV and radio studios as well as airports,” she added.

She is part of a group nicknamed The Team Girls who each support a different member of the band.

Kelly added: “I have a box full of t-shirts saying things like ‘Team Egan’ and ‘Team Filan.’ I update them with new graphics and pictures each time we meet them.” 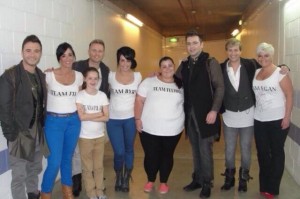 “The Team Girls” meet Westlife backstage at their farewell tour

But she was flying solo on Friday something Kian spotted himself.

“He said ‘have they made you come on your own today?” said Kelly. “We just had a nice relaxing chat even though there was chaos going on around us. I told him he needs to do some concerts soon because my ‘Team Egan’ banner needs to get out the cupboard. Even if he can’t see me in a crowd he always recognizes the banner.”

Over the years Kelly has spent all her holidays from work dedicated to Kian and Westlife but doesn’t regret it.

She said: ‘I would never book a holiday from work until I knew where they were going to be or touring. It’s been worth every penny for the experiences I’ve had like driving down to London at three in the morning to wait outside a TV studio to see Kian for five minutes and then drive back.”

Before Twitter, Kelly discovered where Kian and the rest of Westlife were going to be via websites and message boards which was where she met the rest of the “Team Girls.”

On rumours that Westlife may soon reform she said: “We are waiting for the day that they reunite, me and the ‘Team Girls’ have said no matter where we are and what we are doing in our lives we will be there for that concert.”

LISTEN: Kelly advises young One Direction fans on how to stay safe: