Vaping on the rise as cancer charity slams Marlboro maker

A HORSFORTH vape shop manager says “the big tobacco firms are playing catch-up” as the vaping business continues to boom.

Philip Morris launched an anti-smoking ad earlier this week, with the headline ‘Hold My Light’, and said it was an important step in its aim to ultimately stop selling cigarettes.

The Marlboro cigarette maker was promoting its own smoking alternatives, including heated tobacco product, Iqos.

Cancer Research UK accused global tobacco giant, Philip Morris, of “staggering hypocrisy” over the ad. It says the best way to get people to stop smoking is to stop selling cigarettes.

Jamie Ender, 36, is the manager of The Yorkshire Vaper, with branches in Horsforth and Pudsey.

He said: “We are looking to open a third shop after the success of our current stores.” 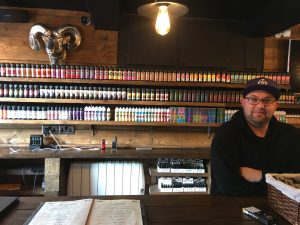 With cigarette sales in the UK on the slide, the vape business continues to grow, with the biggest chains now owning over 100 stores nationwide.

“Many of the people that come into the shop now buy vape liquid with zero nicotine. They just like the taste.”

However, Cancer Research UK, is encouraging people to switch away completely from smoking, including vaping.

They endorse the more classic forms of quitting smoking such as nicotine patches or group therapy.

Whilst the data is not yet available to truly understand the potential damage of vaping, it is widely accepted to be less harmful than cigarettes.

Ahmed Essam, 47, smoked 20 cigarettes a day for over 25 years before taking up vaping a year ago.

He said: “I don’t know what the charity is upset about. Surely any method of stopping or reducing the number of cigarettes you smoke is a good thing.

“I haven’t had a cigarette for two years and I feel great!”