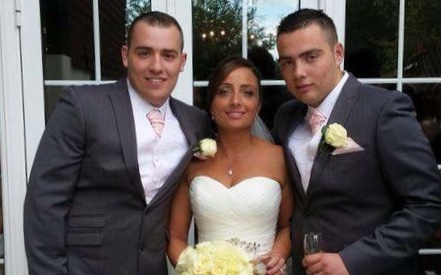 Left to right Perry Kisby with his mum, Sarah Kisby, on her wedding day and his brother Jake Kisby.

AN ACCOUNTANT who attempted suicide is backing the Movember campaign to raise awareness of men’s mental health issues.

Men across the UK are sporting moustaches throughout November for Movember – a charity event that originally raised awareness and money for prostate cancer however more recently has supported male mental health.

Suicide has become a bigger killer than cancer for men aged 20 to 49 and for the first time since 1981, rates have increased in men aged above 45.

Perry Kisby, 25, of Enfield, tried to take his own life in July.

He said: “I think anything that raises awareness for mental health can only be a good thing.

“In future years I hope to be involved in the campaign.

“I’ve been through difficult times myself and I don’t think there is enough help for men to speak up as it’s seen as a weakness and a cause for embarrassment to most men.”

Perry has suffered from mental health illnesses for around seven years.

After a one-month stay in a London mental health unit and reaching his lowest point he said: “The main factor for not speaking out was the stigma.”

Over five million people and 21 countries now participate in the Movember charity event, which started from the idea of two friends Travis Garonne and Luke Slattery.

The campaign aims to reduce the male suicide rate by 25 per cent in the next 13 years.

Although both men and women experience mental health problems, men are less likely to be diagnosed and make up 75 per cent of all suicides.

The Movember charity has helped to fund 1,200 men’s health projects with 20 specifically for mental health.

Peter Andre has publicly shared his mental health battle to encourage men that it is ‘manly to talk’.

More than 500,000 men take their own life every year – that is around one every minute.

Owen Sharp, Movember Foundation CEO said: “When we look at these stats, it becomes clear there is a men’s health crisis, there is a lot that needs to be done.”

Gary Pollard, chief executive of the Men Tell Health charity, said: “Movember is great, the size of organisation is able to raise awareness to more people, but men need year round support.

“Men are told to start talking but give them the right space and they won’t stop. Talking to someone is the first step to recovery, it is not a weakness it is strength and wisdom.”

previousFather speaks of heartbreak over stillbirth as Government pledges to tackle maternity safety
nextLeeds is most improved place to live and work, says new report