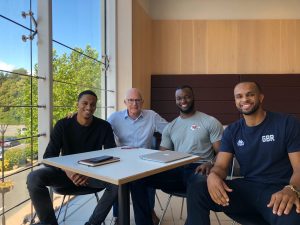 Three Leeds-born friends have launched a new project designed to empower and inspire young people to find and explore their passions.

FindYours aims to give 12-15-year-olds direction whilst at school, highlighting the different opportunities available to them that they might not be aware of both academically and outside the curriculum.

Co-founder and former Allerton High School student Danny Evans began thinking about the project in June after wanting to give something back to his Leeds community which supported him as he ‘found his’ through basketball.

Danny, who is studying at Saint Anselm College in New Hampshire on a basketball scholarship, said: “At that age, you have just started high school and might fall into the trap of going with what everyone else is doing and not really trying to find your own way.

“We have been to six schools so far. We introduce the project to whole year groups and then split off into smaller, more interactive groups and then we try and provide them with the opportunity to try new things.

“One boy expressed his interest in buying and selling clothes so we talked to him about setting up his own business in the future and the different routes he could go down with that.”

Allerton High School’s headteacher Elaine Silson said the project fits perfectly with the school’s aim to enable young people to succeed in as many different ways as possible.

“It’s not about getting the highest academic grades for Allerton High – it’s about being the best you can be in all spheres of life.

“It is vital for everyone to realise they are good at something, that we are all different and that you don’t have to be the world champion at something – you just need to enjoy it.”

She added: “The young people being targeted are those who worry about what everyone thinks and what everyone will say. Hearing someone say ‘this is me, it’s what I like’ is so empowering.

“I was so proud of Danny and the boys.”

In order to ensure a range of inspiration is available to students, the boys have welcomed ambassadors to the team who post inspirational video messages of their stories on Instagram (@findyours_project) weekly as part of their #FindYoursFridays.

One of the ambassadors is a former local Leeds state school student, Louis, who is now working in London as a global markets analyst.

He said: “My role as an ambassador allows me to use my experiences to advise and guide people about opportunities that may arise and how they can be used in the future.

“The more students and schools the project can interact with the better because when you go to schools with a message, students react to it!”

The founders hope the project will become a registered charity in the future and aim to reach all schools in Leeds.

previousThe past brought back to life with Victorian Steampunk in Haworth
nextLeeds: Homeless Street Angels are granted official charity status a week after losing their outreach van