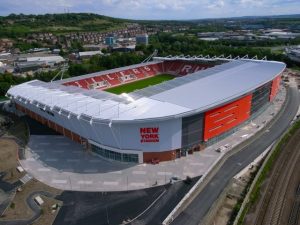 Rotherham United are aiming for a second consecutive home victory against a Barnsley side rocked by an exodus of talent.

The Millers’ home form has given them a slight reprieve after a dismal first half of the season. There are currently nine points adrift of safety in the form of Wigan Athletic in 21st.

To close the gap, Rotherham’s interim manager Paul Warne is looking for some bouncebackability following his side’s second-half collapse at Newcastle, but must also deal with a depleted squad.

Wanting to spend before the transfer window closes on January 31, Warne told the club website: “We have bids in for three different players at three different clubs… However, until those fees are agreed we have to sit tight.”

In a week where Barnsley lost captain Conor Hourihane and 19-year-old right-back James Bree to Aston Villa, Millers boss Warne must deal with transfer speculation of his own, slapping a £5m price tag on striker Danny Ward.

Reluctant to sell, Warne said: “If anyone can tell me of a £2m striker I could get in who would come here and play the way Danny does, they’re better at football than I am.”

Barnsley meanwhile must fight off the cash-laden vultures looming above Oakwell to take away the spine of their team. They are looking to clinch their seventh win on the road this season to close the four-point gap to the play-offs.

While Rotherham can build on recent New York Stadium successes ahead of the South Yorkshire derby, they must improve on recent form against a Barnsley side who they have failed to beat in their last eight competitive fixtures dating back to 1982.