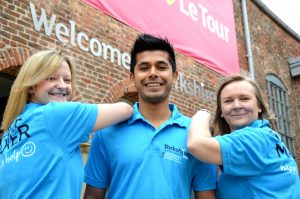 Tour Makers Becky Clarke, 35, from Bingley, Vijay Dayalji, 28, from Bradford, and Claire Brown, 44, from Rawdon, in their Tour Makers uniform.

Almost 12,000 people have been picked to take part in a historical project that will see them helping alongside some of the world’s best cyclists in July’s Tour De France Grand Départ.

Successful applicants were informed on Friday they would be part a part of Tour De France history, after standing out in the application process amongst the 27,000 people that applied.

The Tour Makers will welcome the millions of visitors that will line the streets to watch the event unfold.

Their roles include helping with transportation and acting as a steward for spectators, cyclists and supporting the emergency services.

New Tour Maker and member of Sunday Girls Road Club, one of Yorkshire’s first women’s only cycling club, Flora Marriott, 45, from Holderness, said: “I got into cycling because last year I walked from Land’s End to John O’Groats and cycling was the next step after having sore feet!

“The Olympics inspired me to do something big and challenge myself – something to remember when I’m in my rocking chair. Becoming a Tour Maker is just the same, a real memorable experience.”

French international student at Sheffield Hallam University Elena Perousse, 21, said: “I grew up with the Tour de France so it’s really great to be involved.

“I cycle for fun myself, but I’ve seen the Tour every year on TV for the last 10 years and been to the last three or four final stages in Paris, so I know first-hand how massive it is. Now, to be part of it is just perfect.”

Chief Executive of Welcome to Yorkshire, Gary Verity, said: “The response since day one to the Tour Maker project has been unbelievable, with so many people wanting to be directly involved with this historic event. This project is now becoming a reality – and whatever role a Tour Maker plays wherever that is, they can say for years to come ‘I was there and I helped make it happen.”

The Grand Départ of the Tour de France will take place in Yorkshire on the weekend of the July 5 and July 6.

New Tour Maker Jake Hobson, 22, student, of Headingley, talks about what being a part of Tour De France means to him.