A baby’s first birthday party almost ended in tragedy when the kitchen floor collapsed at a house in Bradford.

Five people plunged through the floor and into the cellar at a property in West Bowling on Saturday.

Three fire engines attended the scene and two people were taken to hospital for treatment. Fortunately none of the injuries are thought to be life threatening.

Neighbour Zaheer Abbas, 37, said: “They were in the middle of the party, just about to put the candles on the cake when it happened. Luckily everyone survived.” 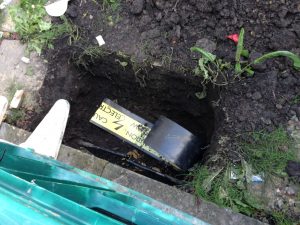 The property’s electrics were severely damaged in the collapse

The family have been forced to leave their home whilst the property is made safe to live in. Mr Abbas said: “We’ve been told to look out for any signs of cracks, anything like that and call the emergency services if we spot anything.”

Authorities are continuing to investigate the cause of the collapse.