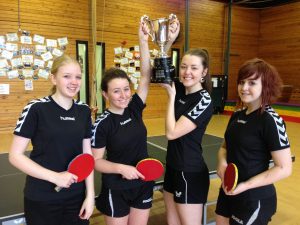 Four girls from a Leeds school have won a national table tennis title – the first in 20 years.

Nicole Finn, 18, of Cookridge, Ellen Auty, 17, of Cookridge, Eden Philipott, 15, of Cookridge, and Sammy Parker, 15, of Horsforth, who all attend Horsforth School, travelled to Hinckley, Leicestershire on Saturday to compete at the Butterfly National School Team Championship finals.

The girls made the final last year but were unable to attend because of the snow storm that hit Leeds.

Eden said: “It felt like we had been given a second chance at winning.”

Nicole added: “It was what we had been building up to for the past seven or eight years.”

All the girls train at Pudsey Table Tennis Club. Secretary and chief coach Peter Thompson said: “We are obviously very pleased. A lot of work has gone into it. They are the first school team in Leeds to win a national title in over 20 years, so that puts the achievement into perspective.”

Over the course of the day, the girls competed in three games beating Wembley Technical School and Ipswich High School for Girls both 7-1 and faced North London Collegiate School in the tense final.

The team won the final 5-3 and took home the trophy.

Sammy, who won the last game, said: “It felt really good to win. We were in shock. It was pretty much our last chance to win as a team.”

It was the team’s last competition together before Nicole and Ellen leave school to attend university.

Horsforth School PE teacher Paul Gray, 54, said: “It is a fantastic achievement for the girls after they missed out last year because of heavy snowfall. I am immensely proud and the whole school is absolutely delighted with their achievements.”

Watch the girls in action…