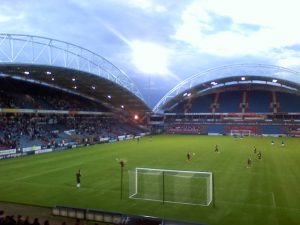 Three first half goals was enough to see an energetic looking Huddersfield side beat ten man Brighton and Hove Albion to close the gap on an automatic promotion spot to seven points.

Terriers full back Tom Smith put the hosts in front eight minutes into the first half, before Tomer Hemed pulled one back for Brighton 12 minutes later following a poor pass back from Aaron Mooy. But Nahki Wells and Elias Kachunga both scored before half time to put Huddersfield 3-1 up. Lewis Dunk rounded off what was a poor night for Brighton, getting dismissed for a second bookable offence.

Huddersfield came into this game unbeaten in five at home, whilst Brighton came of the back of an away loss in the FA Cup to non-league Lincoln City.

Brighton full back Bruno picked up an early booking less than a minute in for a foul on Van La Parra and then could have picked up a second booking almost immediately  for another late tackle, this time on Aaron Mooy.

Chelsea loanee Izzy Brown had the first shot of the game on the after good work from Kachunga on the right but his effort was straight at the keeper.

Huddersfield then hit the post a minute later after the ball found Van La Parra through a horde of bodies but saw his effort bounce off the outside of the post.

Tommy Smith then put the Terriers in front eight minutes in when his cross was deflected back into his own path, which he then curled past David Stockdale with his left foot.

A poor pass back from Aaron Mooy allowed Israeli international Tomer Hemed in behind the defence to equalise against the run of play 20 minutes in, the striker rounded Danny Ward and slotted home Brighton’s first shot of the game.

David Stockdale pulled off a wonderful save from a fierce Van La Parra volley from the edge of the box.

But the Brighton keeper couldn’t do anything about Nahki Wells’ strike two minutes later, who buried the ball into the top left corner after it had found the young forward off the foot of Oliver Norwood during a slide tackle.

Brighton’s night got even worse two minutes into added time when Stockdale palmed Nahki Wells’ cross into the path of Elias Kachunga, who was on hand to head into an empty goal, which proved to be the last act of the half.

Van La Parra continued causing problems in the second half and nearly scored Huddersfield fourth, only to be denied by Stockdale at the near post.

Brighton had a man sent off ten minutes later when Lewis Dunk lost the ball and then caught Izzy Brown with a late lunge which led to referee James Linington giving the Brighton academy graduate a second yellow card.

The post rescued Brighton again from conceding another goal when Jonathan Hogg’s 30 yard effort had the beating of David Stockdale but thrashed the outside of the post.

Brighton will see this as a missed opportunity to extend their lead at the top, with Newcastle United just 1 point behind the league leaders.