Ahead of their heavily-hyped heavyweight bout at the O2 Arena, David Haye and Tony Bellew came face to face at a press conference in Liverpool to signal the start of fight week. 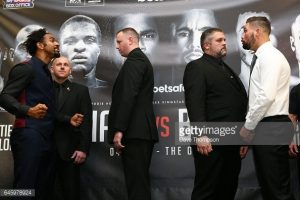 The pair were separated by security as a precaution after Haye previously threw a punch at Bellew during a head to head at a press conference announcing the fight last November. Credit: Getty Images/Dave Thompson.

The major talking point from the event was the way in which Haye spoke about Bellew’s passionate scouse fans labelling them “scum of the earth” in an interview with Kugan Cassius for IFL TV.

The trouble had been brewing since the pair clashed at ringside after Bellew’s third round knockout victory over Haye’s personal friend BJ Flores, making the first defence of his WBC Cruiserweight title.

Haye was ringside to provide analysis for Sky Sports and the pair exchanged words shortly after the final bell.

A key talking point in the build-up to this fight is Haye’s extreme confidence with how easily he will deal with the Liverpool fighter on Saturday night. He told Sky Sports: “I don’t want him to come back and start defending his titles. He has disrespected me too much for that. I need to finish his career in one fight and I will do it.” 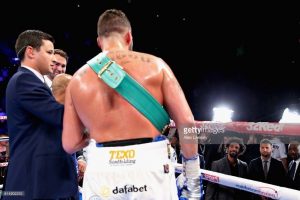 The pair were involved in a heated exchange after Bellew successfully defended his WBC Cruiserweight title. Credit: Getty Images/Alex Livesey.

What are the bookies saying?

Haye and his team believe that an emphatic victory could put him right back in the mix at the top of the heavyweight division. Although his last two victories have come by impressive knockout they were against very limited opposition in Mark De Mori and Arnold Gjergjaj, so these performances are very much taken with a pinch of salt. Haye will also have keen interest in the huge fight between IBF Heavyweight champion Anthony Joshua and former opponent Wladimir Klitschko in front of 90,000 at Wembley Stadium on April 29th.