From London, New York, Sweden to Grimsby. Who is Michael Jolley? 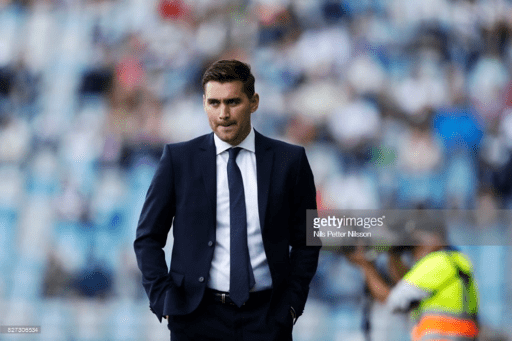 The name Michael Jolley might not ring a bell to a casual football fan, but maybe it should. Grimsby Town’s most recent managerial addition came into football from an angle likely unknown to most. Jolley, 40, originates from Sheffield, the birth place of modern football.

In a city dominated by two huge clubs in football, Sheffield united and Wednesday it is unsurprising Jolley caught the football bug from a young age. Released from Barnsley aged 16 however, Jolley’s life took a different turn. Academically gifted Michael is more than just a pretty face. After studying economics at Cambridge University earning himself three ‘blues’ in the process. A ‘blue’ is awarded for competing at the highest sporting university level, which must also include playing in a varsity game against the University of Oxford. As you can imagine Jolley was in the football team.

He later joined a graduate scheme with HSBC in a career which eventually took him into the nation’s capital. Beyond this came the next bold step in working life. Fast forward a plane ride across the Atlantic and Michael found himself sat behind the desk of bond-trading company in the Big Apple.

In no way regretting the decision he described New York as “a special place” after being presented with an opportunity in his own words “a lot of people would probably take up” After moving back to London to continue his life in the financial sector Jolley decided to make a complete U-Turn on his professional life returning to where his passion truly lay. Football.

In a recent interview with Deputy Sports Editor of City A.M Michael challenged the regular concept of moving from the city to a career in football. “Why does someone completely obsessed with football end up in the city?”

With that mind-set came a move to Crystal palace and a 14 year career change leading him to positions in top establishments such as Nottingham Forest, Sterling University, Crewe Alexander, manager of Burnley u23s and most recently manager of then Swedish first division side AFC Eskilstuna before taking the reins at League Two Grimsby Town.

After taking over the struggling side in Sweden Jolley made noticeable improvements. A highlight of which was guiding his side to a 3-1 victory over the reigning and run away title contenders [Malmo]. A result so impressive it lead to a managerial masterclass interview describing exactly how it was achieved. Although his efforts weren’t quite enough to save the division’s bottom side Jolley had gone a long way to stamping his intelligence on the on looking world of football.

Now the spear head of The Mariners attempt to avoid the drop Michael jolly looks back at his time in Sweden with fond memories and a positive attitude to how it has benefited him both as a person and in footballing terms.

“In my opinion, life is not a dress rehearsal’ ‘my dad was a really big influencer on me” Michael spoke of how his father’s underling core message was, in slightly different words, to dream big and go for it. That, in the least cliché way possible, you can achieve whatever you want to in life if you put your mind to it and work really hard

“I’m just the sort of person, I think there’s loads of opportunities out there to do whatever you want to do with your life and I don’t think you should waste it”

Fully committed to Grimsby speaking of his ideal long term plan to improve the club from top to bottom with things such as developing facilities, improving the playing squad, improving the stadium. He also lives in knowledge of the cut throat business he has signed up to. Football is a business based often in the here and now and on the chance that results short term don’t go to plan aware of what could potentially happen.

With that being said a future move abroad is not off the table if the situation permits “ if the right circumstances, the right opportunity came to go and do something overseas again then I’d be really open to it’ ‘there’s a big wide world out there with lots of opportunities and lots of things to see”

The experience of coaching abroad has helped open Jolley’s eyes to how the English game is developing “English football has moved away from 4-4-2, direct play, having a big man up front… English fans are a lot more educated about different systems and different ways of playing”

A big few months are in store for Michael and I’m sure he can expect to be kept very busy. But one thing for sure is that he is a young man on the up. If you don’t know who Michael Jolley is then you should. If you don’t recognise the name in football, you will. A man of humble beginnings kept down to earth by the environment he was brought up in, this is one Yorkshire man with a point to prove.

previousTigers travel to St Andrew’s to face a lacklustre Birmingham side
nextOssett: A town united