Army Reserve on the look out for new Leeds recruits 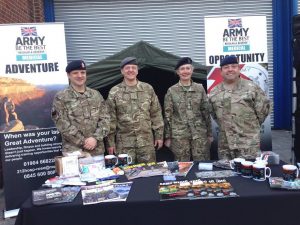 More reservist soldiers are needed to help plug army shortfalls, according to a new recruitment drive in Leeds.

An open day in Harewood-Churchill Barracks featured representatives from local units to encourage more reservists to sign up.

He said recent army reductions initiated by the Army 2020 plan created a need for more volunteers.

To generate interest in Leeds, the event included equipment displays, interactive and information stands.  Among them were the Yorkshire Regiment (combat), the Parachute Regiment (combat) and the Royal Logistics Corps (transport, catering & medical).

Serg Coles said: “The Army Reserve offers quite a lot of bonuses and benefits financially for a full time student.  A paid hobby, that is fantastic!” .

He added that the Army Reserve often recruit due to a high turnover of volunteers.

Phillip Newstead, 24,choose to join in. He said: “I thought the reserve could give me a good taste of what army life was like.

“It’s really handy to earn money and to keep fit. I’ve been to Spain, the US, Belgium. I played football, the reserve is always a bonus and I love it“.

The roles are accessible to anyone aged between 18 to 60, without any previous military experience.  Serg Coles said that the main take up is people in their 20s.

He underlined that 70% of the roles available are both open to men and women.

The next events will be held in Sheffield end of April and in Middlesbrough this summer.