Miliband ruled out coalition with SNP 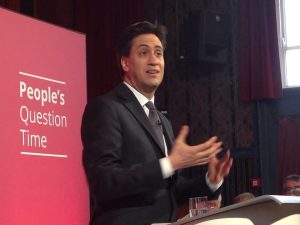 by Jay Unger and Caroline Grandjean

Ed Miliband told North Leeds he is ruling out a coalition government with the SNP after the election.

The leader of the labour party told party supporters at a ‘people’s question time’ in Guiseley today, that “This idea is nonsense. It will not happen.”

Outlining his plans for the election, Mr Miliband added: “The only thing I want to see in May is Labour wining with a majority vote.”

However he left the possibility of a looser agreement with the Scottish Nationalist party in a hung parliament, open to interpretation.

In a move to bolster party confidence within the area, which is currently held by conservative MP Stuart Andrews, the leader of the opposition said that: “The conservative party has given up on the Scottish people. They are now simply using Scotland as a political device.”

“The real danger to our country is a Tory government propped up by UKIP.”

Taking questions from local residents Mr Miliband also said that the key issue that will determine the next election will be the NHS and that his party would focus on devolving powers from Westminster to local governments.

He said: “The most important thing we can do is to take power out of Westminster and Whitehall and give it to people right across England. “

“If you bring resources closer to people, then you actually tackle the problem of people feeling power is not near them and that they have no say. That is what the Labour government will do.”

However the labour leader failed to state exactly how he would give powers back to local governments, and didn’t expand on what he meant by ‘bringing resources closer.’

Mr Miliband’s appearance at Guiseley Theatre was to promote the party within ‘swing constituencies’ and support Labour candidate for Pudsey, Jamie Hanley.