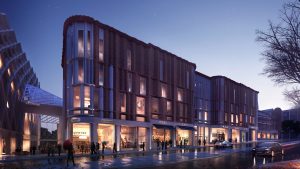 The development of Leeds’ new £150m Victoria Gate project will bring 2000 jobs to the city.

Spokesperson for retail property specialist Hammerson, Emma Stanham said: “Phase one of the scheme will create up to 1,000 construction opportunities and 1,000 retail and hospitality jobs.”

Victoria Gate will open in 2016 and will also house the first ever John Lewis store to come to Leeds.

It will be joined by up to 30 other retailers, restaurants, cafes, a leisure space and a casino in the city’s former Eastgate Quarters.

Property Director at John Lewis, Jeremy Collins said: “This is very exciting news. We have long-held an ambition to open a full-line John Lewis department store in Leeds. The support of the City Council has also been tremendous. We look forward to trading alongside other established retailers in the city enhancing Leeds as a premium retail destination”

Retail property specialist Hammerson who also own the Bullring in Birmingham and London’s Brent Cross Centre is behind the project.

Mr. Atkins said: “A huge amount of hard work and commitment from the team, the Council and John Lewis has enabled us to reach this point. As we begin the delivery phase our focus is now to ensure we attract the best retailers and to ensure that on opening in 2016, Victoria Gate becomes a thriving destination within Leeds.”

Victoria Gate follows the opening of the £350m Trinity Leeds shopping centre that opened in 2013, which was the only major retail development to launch in the UK last year.

Leeds City Council executive board member for the economy and development Councillor Richard Lewis first approved plans for the development in September 2013.

Mr. Lewis said: “This development will be the latest addition to our city’s impressive retail centre. It will be a stunning quarter bringing one of the largest names on the high street to Leeds.”