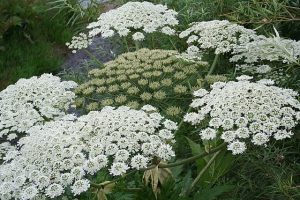 If you’re walking your dog or taking a stroll alongside one of Leeds’ waterways this summer, you’re advised to be careful. Giant hogweed has been sighted at various locations in Leeds, including Kirkstall Road.

The impressive-looking plant, which can grow up to 20 feet high, has sap which causes skin to become ultra-sensitive to the sun. This can result in horrific burns.

William Kitts, Landscape Team Leader for the River Stewardship Company which has been contracted to remove hogweed in Leeds, said: “It’s similar to a chemical burn. Straight away we have to douse it with water and cover the person up. My team are always protected in full suits, but if there was any contact I’m instructed to wash off the sap immediately and take them straight to A&E – before I even fill in the health and safety report.

“There is no treatment for this other than what you would do for a chemical burn, but of course this isn’t an ordinary chemical burn as it can potentially be reactivated over and over again by the sun.”

Councils are supposed to remove the plant after detection due to its toxic nature but finding and disposing of it quickly enough to avoid injury to members of the public is proving difficult.

It also spreads virulently, producing hundreds of spores which wash downstream and anchor themselves easily to neighbouring riverbanks.

Mr. Kitts says: “We can get rid of easily enough with chemicals, but give it 12 months and we’ll be back again.

“Members of the public should avoid this plant completely. I can’t emphasise enough how nasty it is.”