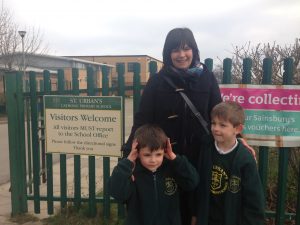 ANXIOUS parents and teachers are urging the council to bring forward plans to slash speed limits to 20 mph outside a primary school – fearing their children’s lives are in danger.

Speaking to a full council meeting at Leeds Civic Hall on Wednesday, Zoe Walker, 38, of Parkside Place, and mother of two boys at St. Urban’s, said: “Every day I see cars screeching to a stop in front of children.”

Other incidents include people overtaking those who slow down at crossings, drivers not allowing enough time for parents with buggies to cross and motorists not stopping at all.

Headteacher Tara McStay, 41, said: “The fear is that somebody will be – if not killed – gravely injured on the crossing.

“It’s too fast. People haven’t really got the stopping power at that speed for children who might, unpredictably, run out on to the road,” she added.

Twenty-seven different 20 mph zones are to be rolled-out near schools in Leeds over the next financial year, but Mrs Walker, a Parent Teacher Association member, proposed to the council that this be brought forward in Meanwood to prevent fatalities.

Parents, teachers and school governors who signed the petition want this to apply to Tongue Lane and Church Lane from the ring road up to the Waitrose store on Green Road – Cardinal Heenan High, Penny Field and Meanwood Primary schools are also based on these roads.

A safe crossing for children beyond the roundabout at the Church Lane and Parkside Road junction was also proposed, and for Tongue Lane’s zebra crossing to be changed to a pelican or monitored by a crossing guard.

Grant Lythe, 47, father of Federico and Sofia, in years three and six, said: “A kid’s going to get knocked over – it’s pretty certain it’s going to happen.”

Leeds City Council has been approached for comment but is yet to provide one.