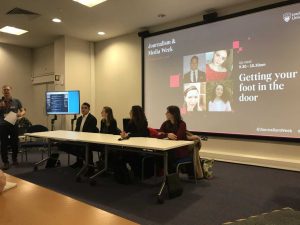 Four Leeds Trinity graduates today highlighted the importance of saying yes to any opportunity, in order to ‘get your foot in the door’.

They were speaking at a panel as part of Leeds Trinity’s Journalism and Media Week.

Xanthe Palmer initially got into Radio Leeds covering sport, although this is not her area of expertise. She said: “To be honest with you, I know the sports journalists are going to be really angry with me right now, but I know nothing about sport, I don’t know the first thing.

“I found that quite a challenge, but you make your way around these things. And since then I have tried to move around different programmes, so I have been doing some breakfast producing shifts.

“Like I say, getting your foot in the door, once you are in there, it is a lot easier to move around. It’s about making contacts with people while you have got that opportunity and getting your name around, even just making them a coffee.

“It really is just getting your name out there, making people know who you are, being nice and you’ll get somewhere.”

Charlotte Regen, who works at the Birmingham Mail added: “My first job in media was in video licensing. I applied for it and they explained we do work for TV shows and newspapers, so it was a way into journalism.

“I applied for the Birmingham Mail, their online presence. I’m actually now a reporter for my local area. It’s just about taking any opportunity that comes to you.”

The University, which has a statistic of 95% of students being in work or education after graduating, offers a range of support and opportunities for students.

Otis Holmes, who works at ITV calendar explained: “Keep in contact with your lecturers, they know when jobs come up because the university has built such a good relationship with different media outlets.

“If you’ve been nice to the lecturers and shown that you are hardworking, willing and can do the job then they will put you forward for those.”

Becky Hammill, who works closely with Channel 4 said: “I was working on Dispatches while writing my dissertation, it was really really hard work. But I did it, I said yes.”

Glyn Middleton, a senior lecturer who supervised the panel concluded: “Say yes. Whatever you’re asked, the answer is yes. Can you do it? Yes. I’m not paying you anything. Yes. Just get in, because once you’re in it’s easier.”