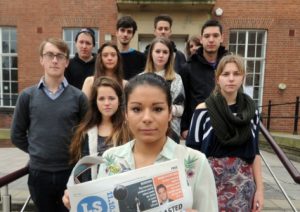 The editorial team at LS, headed up by editor Rehema Figueiredo

The Leeds Student newspaper is appealing for donations to keep it afloat after a funding row with Leeds University Union.

The union, which is responsible for generating advertising revenue for the newpaper, failed to reach its latest financial targets, but blamed this on the decision by editor Rehema Figueiredo to launch additional magazine LSi at the beginning of the year.

Miss Figueiredo claims the students almost saved the paper by securing a regular advert for a Leeds music event, but were told by the union that it conflicted with their pubs and bars so they could not run it.

The newspaper’s budget, including the editor’s wage, is funded by the student union.

The only non-union aspect of the budget is the membership students pay to be part of the paper.

These fees usually cover day-to-day costs but LS has depleted the fund after using it to cover print costs for two weeks – meaning the account is now overdrawn.

On Friday Miss Figueiredo published an article about the crisis on the LS website, which is continuing to run. It said: “This week members of the society were informed that the target set by LUU to cover printing costs had fallen short by £5,200 and therefore should cease printing.”

Rehema told Yorkshire Voice: “We felt forced to go to press with the story, we were left with no options.”

Although the union pre-approved the LS story before publication, it then published another story on its website, denying the rumours.

In the union’s article, officer Gregory Sturge said: “At the start of the year, the changes to the format of the paper made by the current editor meant that LS and LSi would have higher printing costs and financial burden than in previous years.

“This is not an issue that has crept up on LS and the union – the risk was very clear from the start.”

Talks are still ongoing with the union.

The paper has raised £430 of their £5,200 goal since Friday on http://www.indiegogo.com/projects/save-ls-newspaper

Rehema said: “If we have any hope of printing after Easter without union support we need donations.”