Leeds is top tourism destination, but lags in overseas visitors 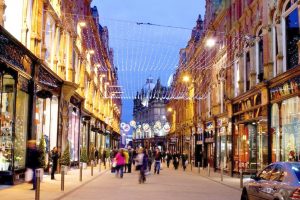 Nearly 27 million people visited Leeds on holiday and business last year, with their visits worth £1.5bn to the city’s economy.

However, of those 27 million, only 370,000 came from abroad. This accounts for just 1% of the number, and is behind Manchester, which had 999,000 overseas visitors, Liverpool, which had 608,000, and even smaller cities such as Brighton and Oxford.

Spain, Holland, France and Germany are the overseas countries whose tourists came to the city most frequently.

Tourism is a big boost to employment in Leeds, with 18,500 jobs in the ‘leisure tourism’ industry.

Business-related visits to Leeds are also high: the city is the UK’s fifth most popular venue for conferences.

Councillor Judith Blake, leader of Leeds City Council said: “The Leeds economy has continued to thrive in the face of a challenging financial climate and we are now firmly established as one of the UK’s top destinations for shopping, business and leisure.

“I’m sure the city will continue to flourish as one of the country’s top tourist destinations.”