How to Win the NBA MVP Award

When it comes to winning the NBA’s Most Valuable Player (MVP) award, over the last ten years we can see that only three statistics matter; points scored, games played and total wins.

Six players have taken home the Maurice Podoloff Trophy since 2008. LeBron James has won the award four times, Stephen Curry twice and Derrick Rose, Kevin Durant, Russell Westbrook and James Harden once each. The graph below details the statistics of each player in the season that were named MVP. 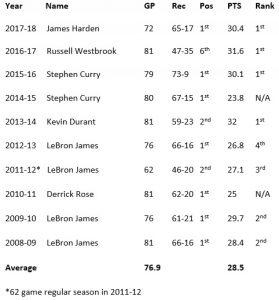 Firstly, it is obvious that in order to win the MVP award you need to play a substantial amount of games.

Other than the 2011/12 season where only 62 games were played due to a player lockout, the NBA has a gruelling 82 game schedule, so there are plenty of opportunities for players to get injured. If you fail to grace the hardwood less than 70 times in a season, the Maurice Podoloff Trophy will be sitting on someone else’s mantelpiece.

Only James Harden and Russell Westbrook have finished the regular season in the top-five of the assists and rebounds category so those statistics have been disregarded.

Instead, we move onto points scored per game (PPG). Only twice in the last decade has the MVP winner finished outside of the top-five in this statistical category. All but one player averaged more than 25 PPG.

Stephen Curry had the lowest PPG in his 2014/15 MVP winning season, however this can be attributed to our final category; wins. Curry managed to take his Golden State Warriors from a record of 51-31 in 2013/14 to a record of 67-15 in 2014/15 where the Warriors eventually went on to win the NBA Playoffs.

Each winner of the award has led his team to a top-two finish in their respective conference at the end of the regular season. The only exception is Russell Westbrook in 2016/17 when his Oklahoma City Thunder finished with a mediocre 47-35 record. 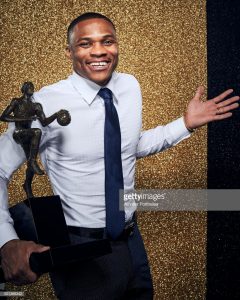 However, Westbrook’s individual statistics were so good that they completely overshadowed his team’s performances. The Thunder point guard became only the second player in NBA history to average a “triple-double” (double digit figures in three statistical categories).

So, what does it take to win the Maurice Podoloff Trophy? It has become clear that if you play more than 76 games, average above 28 PPG and lead your team to a top-two finish in your conference, then you are a solid contender to be named the NBA’s Most Valuable Player.

previousDo teams perform better when playing in front of more of their own fans?
nextHow have mid-season international breaks affected Premier League clubs in 2018?