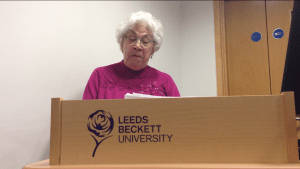 A WOMAN who fled Germany at the age of four gave a talk at a special Holocaust Memorial Day event on Wednesday Feb 1.

Leisel Carter, from Leeds, shared her story as a holocaust survivor in a lecture at Leeds Beckett University.

Leisel was not a camp victim but she lost most her family at the hands of the Nazis and at the age of four had to leave her home in Hildesheim, Germany.

She said: “My mother left to go and stay in England. It was approaching my fourth birthday and I had to make arrangements to England and stay with my mother.

“I was alone and had to go on several trains to meet my family. I spent time with family and friends. I also spent some time in a children’s home.”

Leisel told how she embarked on her incredible journey, via Sweden and Norway, and said sometimes she did not have anybody else by her side.

Her mother had escaped to Hull earlier on but her job as a domestic servant meant they could not live together. So Leisel stayed with various foster families along the way and eventually settled in Leeds at the age of seven, reuniting with her mother whenever possible. 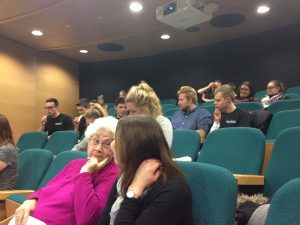 Leisel, who is now a member of the Holocaust Survivors’ Friendship Association, was separated from her brother and she never met her father, who died in Germany.

She visited her hometown a couple of years ago to visit her father’s grave. It was a special and emotional moment for her.

She said: “It is mandatory for children in school to look after the graves. It’s really nice that my father’s grave is looked after when I am not there.”

Jamie Lock, team assistant at the Holocaust Memorial Day Trust, said: “There is so much you can learn, it is an important time of year and young people should still learn about it today.

“It is important to create a safer environment and prevent discrimination today.

“The main message for the talks we do is for people to learn through their experiences, it is first hand. It is powerful and we should appreciate the survivors who come and talk.”

The event also featured Dr Rachel Rich who explained about the history of Jewish food.

She said: “Jewish food is a big part of our history. Over Hanukah we eat fried foods to celebrate the miracle of oil.”

Facts about the Holocaust: