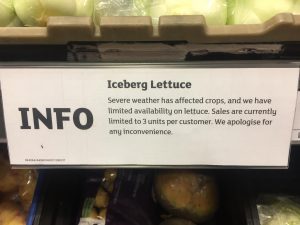 THE CONTINUING shortage of imported vegetables has sparked a debate about Britain’s shopping habits.

Supermarkets and grocers have been forced to ration the amount of veg bought per person after bad weather in Spain affected crops.

As the veg crisis could last until April it has sparked the debate Twitter and amongst growers on whether we should still be importing from other countries.

Some people questioned whether we should be eating more seasonally and locally. 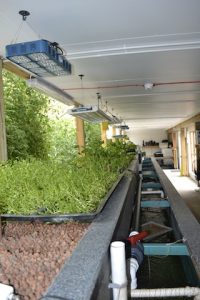 Aine Douglas, business development manager at Incredible Aqua Garden in Todmorden, said: “If we source our food locally it has a lot less intervention in order to keep it fresh, if it’s local it travels less, we don’t have to use preservatives and it’s supporting local businesses and communities it doesn’t have to focus on external factors.”

Since the success of Incredible Aqua Garden they now also help educate school children and families to grow their own vegetables.

“We’ve seen over time a raised awareness of good quality food and the fact that it is easy to grow, you don’t have to have a farm.” 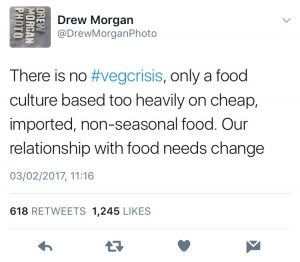 Lighting technician, Drew Morgan, 29 said: “We’re too used to being able to get veg from anywhere in the world at any time of year. If we make an effort to eat more seasonally we will support our local farmers, reduce emissions from transport and put less pressure on limited natural resources.”

There are still many local producers who grow fruit and veg all year round to support the community and prevent importing from different countries.

Why do we have a vegetable shortage?

-The vegetable shortage started because of bad weather in mostly Spain and Italy.

– Spain has experienced the heaviest rainfall in 30 years.

– Spain has also suffered from frost and snow for the first time in many years.

– Within a year veg production has plummeted down 20-30%.

– Europe imports most of its veg from southern Spain.

– Bad weather means Europe could be lacking in fresh veg until April.

– The price of imported veg could increase because of the shortage.

– Courgettes, cabbage and broccoli are a few of the vegetables affected.