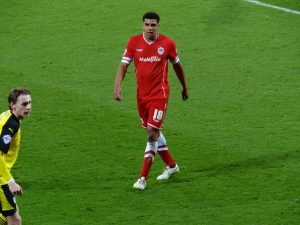 Leeds United have completed the loan signing of Cardiff midfielder Tom Adeyemi in a season-long deal.

The 23-year-old joined Cardiff from Birmingham last summer for a fee believed to be in excess of £1 million.

He made 23 appearances for the Blue Birds, scoring once.

The Whites have an option to make the move permanent.